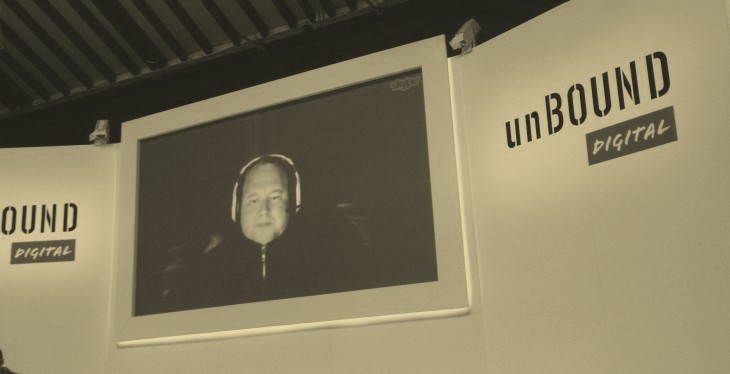 It has no doubt been a long few years for Kim Dotcom, the founder of file-sharing service Mega who’s currently being chased by the music labels and movie studios, and battling extradition with US authorities over copyright infringement claims around his now-defunct Megaupload company.

Despite some victories in the ongoing pursuit, Dotcom still finds himself at the center of a case that claims he cost the entertainment industry around $500 million. With his lawyers recently jumping ship after Dotcom ran out of money, the extradition case has been pushed back to June as he strives to build a new defence team, though he has a bail hearing coming up on Thursday that will determine whether he will have to go to jail pending the outcome of the main hearing later this year.

Speaking via video-link at the unBound Digital conference in London yesterday from his home in New Zealand, Dotcom was quick to remind those present that this may well be his last ever ‘public’ appearance as a free man. And that really might not be an exaggeration either.

Besides his own struggles, Dotcom didn’t pull his punches when discussing everything from the US government and surveillance, to encryption and losing faith in the legal system.

Here’s what he had to say.

Permeating Dotcom’s grievances throughout was a constant reference to his case being treated as a criminal one, rather than as a civil matter. Remember the circus that erupted around Dotcom’s ‘capture’ from his mansion in New Zealand, involving members of the ‘Elite Special Tactics Group’ landing by helicopter? It was certainly something you’d more likely associate with the ensnaring of an international drug-trafficking cartel, than a cloud-storage company facilitating the sharing of files.

“I’m an easy target because of my flamboyance – I live a big life, I have a great lifestyle, so when you travel around with super yachts and private jets and so on, that’s probably not the best way to keep a low profile,” explains Dotcom, somewhat matter-of-factly. “Of course, the websites (including Megaupload) were based in Hong Kong, it was not a US-based company, and we had a significant amount of traffic completely out with the control of the US government.”

Two sides of the coin

There are two sides to the overarching debate – one being that Dotcom and his team merely provided the cloud-based tools to facilitate the sharing of files, and what the users do with the technology is up to them.

Dotcom compared his case with many other high-profile ones – namely the rise of video and the now famous Sony Betamax ruling. The crux? Movie studios thought these new-fangled devices would kill the movie industry with piracy. However, there are legitimate and illegitimate uses for all technology. In the so-called Betamax case, which saw Universal City Studios challenge Sony in 1983-84, the US Supreme Court ruled that copying from TV onto video cassette constituted fair use, and was thus permitted.

Dotcom has also compared digital services such as Megaupload to the postal service – the latter can also be used for illegal purposes, but should that mean we close the postal service down? It seems it was this way of thinking that caught Dotcom off-guard.

“We all thought this (precedent) would apply to us too, we are a dual-use technology – yes, people can use Megaupload to upload a movie and share it, but we have always taken it down,” he says. “We have a 100 percent takedown compliance, we gave Hollywood studios direct access so they could remove things they thought were infringing on their material. So for us, all of this is incredible that this is even possible. It’s the same story we have with Iraq and weapons of mass destruction – ‘either you’re with us or against us’.

“The US government is using their power and abusing their power and lying out of their teeth, the maliciousness of this case and how they’ve constructed it, and indictments and the lies that are in there and the messages that have taken out of context. It’s just so dirty now. There are no ethics any more, I lost my faith in law and the judicial system.”

Then there’s the other side of the coin, those on the authorities’ side who clearly differentiate Megaupload from the likes of Dropbox and other legitimate cloud-based services.

“Megaupload wasn’t a cloud storage service at all, it was an unlawful hub for mass distribution. To be clear, if a user uploaded his term paper to store it, he got nothing – and, in fact, unless he was a paying subscriber, Megaupload would delete the paper if it was not downloaded frequently enough. But if that same user uploaded a stolen full-length film that was repeatedly infringed, he was paid for his efforts.

That’s not a storage facility; that’s a business model designed to encourage theft – and make its owners very rich in the process. There’s nothing new or innovative about that. That’s just a profiteer using existing technology to try to get rich off of someone else’s hard work.”

As you’d expect, Dotcom disagrees with this assertion, and even went on to launch his follow-up service called Mega last year, which he says now has 15 million registered users. He also says that the ongoing legal matters have technically left him penniless, though that is in large because he has transferred his new assets to his family.

“As of today, I don’t own a single share in Mega – the family trust that controls the shares is now completely in the control of my wife (now separated), and my five children are all beneficiaries,” says Dotcom. “Hollywood has tried to attack the new assets (from Mega) that were generated after the raid – as you know, the US government has seized everything that was created up until the raid, all monies, all valuables were seized in all different jurisdictions. So I’m officially broke just now.”

As the saying goes, hindsight is a wonderful thing. So is there anything that Dotcom might have done differently, to side-step the precarious predicament he now finds himself in?

“Of course I would’ve done things differently, you always learn from things that happen in your life,” he says. “My biggest regret is that I didn’t take the threat of the copyright lobby, and the MPAA, serious enough. I thought that because of court decisions that we have been monitoring with our competitors like RapidShare, and other sites that did exactly what we did and winning, where YouTube was winning against Viacom. Our sense was that we were protected by the DMCA, and by the law that there are cases that have been ruled on are in our favor. Never for a minute did I think that anyone would bring criminal action against us.”

It’s all too easy to side with someone who’s potentially facing up to 88 years in prison – “that’s what my indictment says” [- Kim Dotcom] – when they’re not inherently an evil person. But just in case the gathering today was in any doubt as to who’s in the right and who’s in the wrong, Dotcom frequently guided the discussion back to the hot topic of internet freedom.

“We know from Edward Snowden and the NSA leaks that there is a massive surveillance apparatus currently in place that is watching everything we do in the digital world,” says Dotcom. “There is a copyright lobby that is trying to work with governments to protect their property in a very aggressive fashion – almost in a very extremist fashion – where it’s all about shutting websites down and putting people in jail for things that were being treated like parking tickets ten years ago.

“On the other side we have ISPs, broadband providers, the large telcos that connect us with the internet, trying to establish a two-class system where paying customers get faster, better quality internet whereas everyone else is on the slow lane.”

Yes, Dotcom says that internet freedom around the world is under attack, which has gone some way towards “radicalizing” him. So much so, he launched his own political movement called the Internet Party in New Zealand, but it didn’t meet the 5 percent threshold required to have any real impact. “We’re trying to take the Internet Party global and fight for internet freedom and provide citizenry with a tool to fight back against our rights being undermined,” says Dotcom.

Meanwhile, there’s one thing we should all be doing in the fight against government snooping, according to Dotcom.

“Now that we know that the governments are spying on us and trying to restrict our freedoms and control us, we can create and use technologies to prevent that – the best of course is encryption,” he says. “Communicating encrypted, and surfing the Web encrypted. When you upload files in Mega, they are fully encrypted – you don’t even have to install anything, it just happens. That’s why people like it. You’re seeing more and more of these technologies from all kinds of different companies.”

The next six months or so will be pivotal in the future of Kim Dotcom. Will he go to jail in New Zealand? Will he be extradited and face decades behind bars in the US? Will Mega remain and continue to grow as a business? Only time will tell.

But Dotcom did have some hypothetical words of wisdom when asked what advice he’d mete out to his own kids (he has five), knowing what he knows now: “Don’t launch a cloud-storage service…become a lawyer,” he said, perhaps only half-jokingly.

Read next: Skype for Android now lets you hold video calls while multitasking on your phone