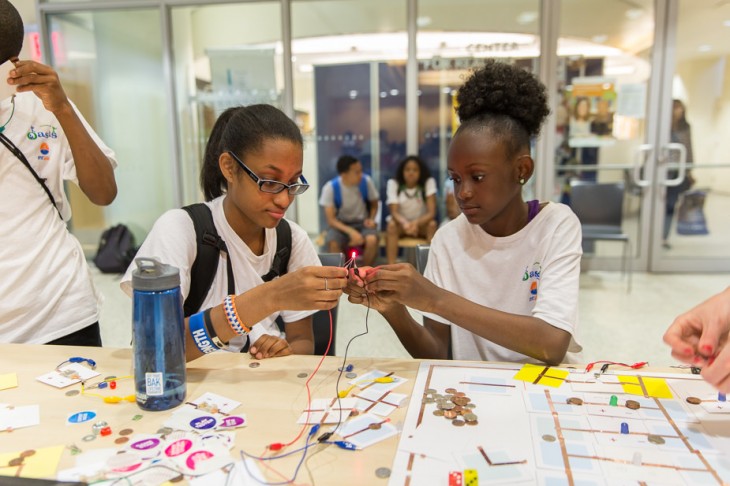 Children scatter across the hall in all directions, as if someone had suddenly dropped a bag of marbles from a great height. The energy in the room is palpable as jubilant classmates pull on each other’s sleeves and chatter incessantly about their favorite activities. Long tables with battle-hardened laptops flank the sides of the room, as tireless volunteers offer advice and support to the curious minds pecking away at keyboards.

It’s the middle of July and the temperature outside is sweltering. I’m already perspiring by the time I make myself known, but all of the students remain undeterred in their quest to absorb everything the event has to offer.

This is my first Maker Party.

Mozilla set up the festival three years ago to expand the scope of Webmaker, its initiative for teaching digital skills and Web literacy. Its purpose is to help people create and contribute to the Web, as well as understand its inner workings. More often than not, learning the basic mechanics of the internet leads to coding, but it’s not the only aim of the Webmaker movement.

Consider Wikipedia. The free encyclopedia is now a staple of the internet, but it’s a resource that is written and molded by a community of contributors. It’s not immediately obvious to a newcomer on the Web, but understanding its makeup is indispensable. This knowledge will arm them with a healthy degree of skepticism, but also an appreciation for those who continue to make it such a valuable resource. It might even spur them to become contributors themselves.

“To fulfill the Mozilla mission, which is to protect the free and open Web, we realized we needed many people all around the world participating in that effort,” Brett Gaylor, VP for Mozilla Webmaker says. “The fantastic thing about the Web is that anyone can write to it, so we realized that we needed to play a role in making sure as many people as possible can do that.”

(A Maker Party in Surabaya, Indonesia)

Maker Party was launched in 2012 under the name Summer Code Party. The concept was largely the same: volunteers could register free, local events and Mozilla would provide them with starter kits, projects and its own Webmaker tools, which are designed to get people making on the Web in a quick, fun and authentic way. It was reimagined as Maker Party the following year.

“This is not band camp, this is like getting together with your friends to start your own punk rock band,” Gaylor adds. “That’s the vibe we wanted to go for.”

There was nothing like it at the time and, many would argue, there still isn’t today. While politicians and technologists talk about the importance of these skills, in many countries the education system is failing to provide them. Programming is certainly one aspect, but there’s also little instruction about the makeup of the Web, or how to effectively navigate and contribute to it as a citizen. Part of the problem is the internet’s relentless evolution, but the bureaucracy and slow-moving nature of many governments also play a role.

Emma Irwin is a developer from Sooke, Canada. She was frustrated by how the Web was being taught in schools and stumbled upon a TEDx video by Mark Surman, Executive Director of the Mozilla Foundation. The talk focused on the “detinkerfication” of the Web, or how it was becoming difficult for young people to learn and hack something together based on their favorite sites.

It led to a project called Hackasaurus, otherwise known as X-Ray Goggles. The tool, once activated, creates a duplicate of the page with all of its source code intact. Users can roll their cursor across the page to highlight elements and then select photos, graphics and text they would like to change. Mozilla offers an editing pane where they can preview adjustments and then, when their masterpiece is complete, publish the “remixed” page at a public URL.

Instantly, Irwin was hooked: “It just spoke to me in so many ways.”

She joined the Webmaker movement and dialed into Community Calls, a scheduled time where mentors can ring a designated number and talk about Web literacy, as well as organizing events. In that environment, it’s no surprise she quickly wanted to run a Maker Party for the people in her local area.

Gina Tesoriero was introduced under slightly different circumstances. She had taken up an internship with the National Summer Learning Association, which makes tutorship available to low-income students in America. A team went to Summer Quest sites – educational camps run over the school break – and collaborated with Mozilla’s Hive Learning Networks to hold Maker Parties.

Afterwards, Tesoriero attended a two-day Maker Party at the Bronx Library Center, which accommodated between 150 and 200 attendees.

“It was just amazing to watch how interested the kids were,” she said. “Everyone came with a different skill level and different interests, but they were trying everything. Usually for adults, trying new things is scary, but these kids just dived in and all of the people at all of the booths were so welcoming.

“Once you put these Webmaker tools in front of everybody, they automatically engage because they can edit a webpage right in front of their eyes. I’m always lucky to volunteer at that booth, because it’s my favorite one.”

The impact so far

It’s difficult to gauge the success of Maker Party, as numbers only tell part of the story. This year, there were over 2,500 events in 86 countries around the world. Mozilla estimates that over 1,000 mentors taught 127,200 learners. It’s an impressive number in many ways, although measuring the impact it’s having on attendees is quite difficult. Did they all learn something and did it change their opinion of the Web? Would they go to another event or recommend one to a friend? For those that discover an interest in coding, will they eventually take up computer science, or use it to compliment their chosen profession?

Given the campaign is only in its third year, it’s probably too soon to start asking these questions. Even so, there are some early signs that illustrate the effect Maker Parties are having across the world at a local level.

Take Irwin. Her first Maker Party sold out and she’s now part of the Mozilla Reps program. She set up a Webmaker Club in her daughter’s school and is now a developer community manager at SocialCoding4Good. The latter connects programmers, developers and other technology experts with open-source projects that are designed to have a deep social impact.

Clearly, there’s some overlap now between her job and the contributions she’s made to Webmaker and Maker Parties: “My work with Mozilla and open source definitely led to the job that I have now and I’m really grateful for that. I’m a big advocate of volunteering; finding your dream job [that way] is a good route.”

The Webmaker Club that Irwin set up continues to grow. After making a GitHub repository for all of her teaching resources, she’s been contacted by mentors in India and Africa who want to develop similar clubs. “I’m really happy to see these countries looking to empower their youth like this,” she adds.

(A Maker Party in Paraguay)

After the Maker Party in the Bronx Library Center, Tesoriero joined an online group for the Hive Learning Networks and attended countless events and meetups. As a special education teacher, she also brought the Webmaker tools into her classroom: “I started using Maker Party and this maker mentality with my students as a reward. It was amazing, they really enjoyed doing it. It was an opportunity to show them how to be creative any way they wanted to be.”

Tesoriero started learning HTML and CSS before setting up a school club called Code Scouts. It incorporates Mozilla’s Webmaker tools and everything she learned from the Maker Parties. Unsuprisingly, the students have developed to a point where their knowledge of coding matches hers.

“They’re a little bit better than me but that’s okay, because teachers don’t need to be the centre of knowledge,” she said. “If there’s one thing I’ve learned from all of this, it’s that I don’t need to know everything about what I’m doing with the kids. I just need to know the resources and how to access them. That’s also pushed me to try new things and step out of my comfort zone.”

Tesoriero and Irwin are just two people that have been swept up by the Webmaker movement. What they’ve achieved outside the Maker Parties shows the true potential of the festival; it’s not just a way to raise awareness about the Web, but a catalyst for creating new, self-motivated communities.

In the years ahead, Maker Party shouldn’t be judged by how many events were set up, or the number of people that learned how to remix a website. Instead, it should be judged by the communities that have grown around them. In particular, the projects and clubs that have been set up by attendees.

That success will probably be impossible to measure. But right now, as Maker Party continues to grow and evolve, it really doesn’t matter.

I remember visiting my first Maker Party on that hot July afternoon. One of the students, a curious boy that never stopped grinning, took me under his wing and showed me all of the activities. We remixed websites. We made stop motion animations. We learned about cybersafety. Every one of these events is pushing in the right direction, and their impact, however small, is cause for celebration.

“Think about how you learned or how you got to your career,” Gaylor said. “I’m sure there was a lot of serendipity along the way that led to that. It’s almost always the chance encounter or the person that took the extra bit of time to help you really understand an issue. There was always that teacher in school that showed you something that really lit you up. Then you followed it on your own and learned a little bit more, before realizing it might have made a connection to another area of study or learning that you hadn’t anticipated.

“The next thing you know, you’re at university studying that and then perhaps, because you’re exposed to people you wouldn’t have otherwise been exposed to, you start a new career. That’s what Maker Party is really about. It’s trying to light up those connections for the broadest amount of people.”

Read next: WEB: A touching documentary about One Laptop Per Child and the spread of the Internet