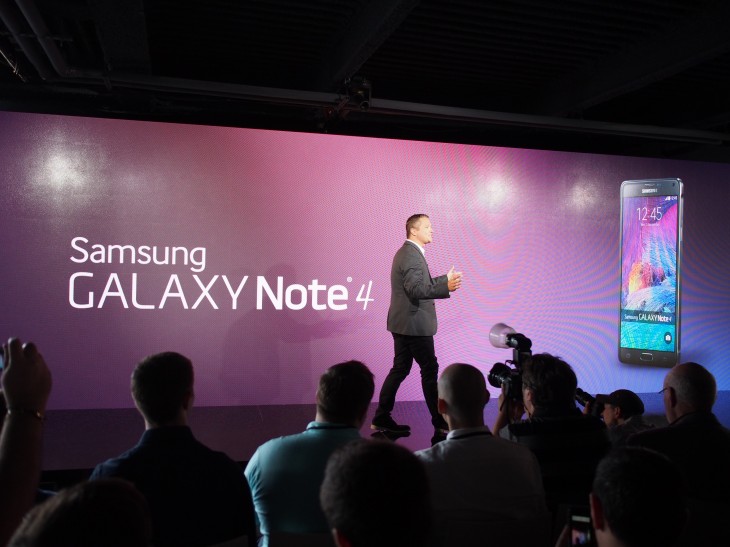 When the original Galaxy Note was introduced, the phone seemed like an eccentric device that would only interest a small niche of users. It goes to show how much the mobile market has changed that the Galaxy Note 4 was the most pedestrian of the three devices Samsung announced today.

Although not radically different than its predecessor, exactly how does the Note 4 fare?

In terms of design, the Note 4 is nearly identical to the Note 3 –  most of the changes are found in the internal specs. The device still sports a similar plastic-fantastic construction, complete with the removable faux-leather texture of its predecessor on the back. The S-Pen is also the same plastic construction, fitting into the side of the device.

The new screen is great, but you also would probably have trouble telling it apart from the previous model at first glance – it’s the first device in the line not to increase the screen size over the previous model.

At 515 ppi (pixels-per-inch), the screen is wonderfully detailed, although it’s probably a little bit of overkill to fit the 2,560 x 1,440 resolution of the 12-inch Surface Pro 3 into a 5.7-inch display. The colors, however, seem to be more accurate than those of the previous models, displaying less of the over-saturation AMOLED screens are prone to.

Samsung highlighted the added sensitivity of the new S-Pen (2048 vs 1024 levels), which indeed seems to draw more accurately than that of the previous model. That said, the pressure curve felt a bit off on the device I tried – it didn’t seem to easily recognize lighter strokes.

Comparing it to the stylus to the Surface Pro 3, which is great despite low sensitivity values, the S-Pen was also more prone to lag behind my movements. Still, that’s mainly nitpicking, as its likely the best stylus you’ll find on a mobile device.

I was able to give the camera a quick try – it exposed well in the mixed indoor lighting and images looked sharp and clean, we’ll need to spend more time with the device to fully determine its quality. The new wide-angle front-facing camera is a welcome addition though, letting you fit in more people for your party selfies.

The Galaxy Note 4 is the least incremental upgrade to the Note line so far, but that’s probably not a bad thing. Sure, it would have been nice to see a new design or a metal construction, but the Note line has found a niche regardless. Whether that will be enough to hold off a slew of new competitors remains to be seen.

Read next: AirCall wants to be a 'Google Voice for businesses'