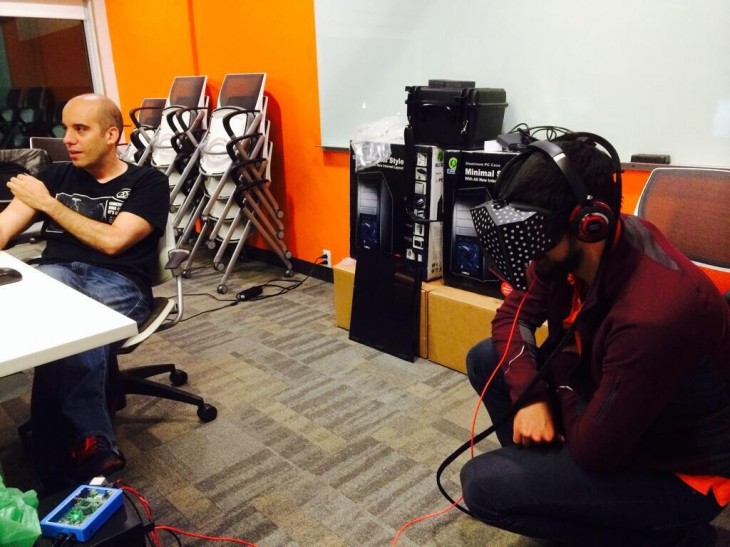 Although a number of Valve employees have jumped ship to Oculus VR, it seems the beloved video game developer and Steam overlord hasn’t given up on its own virtual reality ambitions just yet.

A development prototype of Valve’s virtual reality headset was shown to budding developers at the recent ‘Boston VR Bender‘ gathering, and perhaps inevitably, a batch of photos have found their way to Reddit.

The device looks vaguely familiar to the Development Kit 2 by Oculus VR, with a large, black plastic hood and a series of straps to keep it secure. The unit is also covered with white circular spots, which Road to VR suspects are trackable through an external camera mounted on a desk.

Based on the images, it seems that the head-mounted display is still in an early state. The unit looks fairly cumbersome and, in particular, the hood is fairly bulky – many Reddit users have noted how much lower the hood drops in comparison to the Development Kit 2 by Oculus VR.

Still, it’s notable to know that Valve is still continuing its research in this area. It’s unclear whether the company is planning a commercial product though – in the past, Valve has suggested it’ll share technology with its competitors, but never ruled out releasing its own hardware.

Valve has a lot on its plate, so it wouldn’t be too much of a surprise to see a retail version shelved. With its own video games, the Steam marketplace, SteamOS and Steam Machines, it has plenty to keep itself busy.

Read next: Opera 22 for Mac and Windows arrives with new themes, and 'silent' updates for Windows