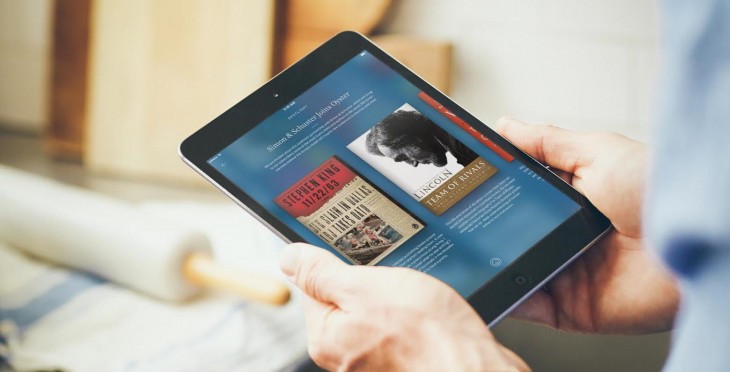 Oyster, the so-called “Netflix for books,” has added its second Big 5 publisher, Simon & Schuster, to its subscription service that lets you read as many ebooks as you want. The publisher has also brought its books to Scribd’s all-you-can-read service.

Simon & Schuster is bringing its entire backlist of ebooks, which amounts to roughly 14,000 titles. The selection won’t include the latest releases, but most recent titles should be about a year old. Oyster CEO Eric Stromberg said in an interview that the deal with Simon & Schuster represents “a tipping point in the access model for books.”

Indeed, when the service first launched last fall, the big complaint I had was the limited selection of big-name titles. Simon & Schuster’s library brings some of Oyster’s top-searched authors, such as Stephen King, Ernest Hemingway and Walter Isaacson, to the service.

Oyster costs $9.95 per month for the privilege of unlimited browsing and reading. The only other Big 5 publisher on board is HarperCollins, though Stromberg did say that he’s happy with Oyster’s ongoing talks with the other firms and expects to continue to add major publishers throughout 2014. The remaining Big 5 companies are Hachette, Macmillan and Penguin Random House.

As it gains traction, Oyster could represent a viable alternative to Amazon, which has secured a dominant position in the ebook space. It’s not quite as easy to binge on books as it is to burn through a TV series on Netflix, but it’s great having the option to peruse and skim through titles for an affordable monthly fee.

Read next: Lockscreen is an iOS app that takes the pain out of finding cover images