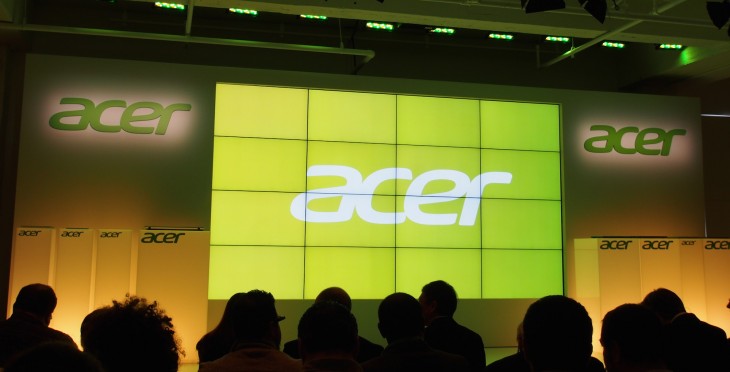 Acer today announced its latest product line which includes the Liquid Leap, a smart band that can track fitness activities and pair with smartphones. The company was quiet on details about the Leap other than that it is 17 mm wide and will be available in limited markets as a bundle with its newest flagship smartphone, the 5-inch Liquid Jade. Both the Liquid Leap and Jade are expected to launch in late July or early August, with no immediate plans to enter the U.S. market.

Along with the smart band tease, the company also announced its latest notebook lines, including the the Acer Aspire Switch 10, a 2-in-1 10-inch Windows 8.1 notebook. The Switch 10 comes equipped with an HD IPS screen, Intel Bay Trail, 2GB RAM, 64GB storage with optional 500GB, and dual front-facing speakers.

Acer also expands on its E series notebook range with the E14 and E15, complete with optional touchscreen functionality. The 15-inch notebooks come with up to seven hours of battery life and gesture-controlled touchpad. The Acer Aspire E14 and E15 are available in six colors.

In addition to the notebooks, Acer showcased its Iconia Tab 7, a quad-core tablet with voice, HD IPS display, and 3G connectivity. Acer also announced the Iconia One 7 with HD IPS display, Intel Dual-Core CPU, dual speakers and various color options, much like the Aspire E14 and E15. The Iconia Tab 7 will be available in mid-May in Europe and Asia starting at €149, while the Iconia One 7 comes to the U.S. at the end of June for $129.

The lineup expands on Acer’s existing budget product line, which includes a touchscreen Chromebook C720 and the Iconia A1 and B1 tablets.