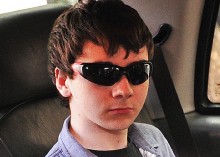 The saga of hacker collective LulzSec dominated the tech news in 2011, and Topiary (real name Jake Davis) grabbed plenty of attention thanks to his witty, eloquent press releases and tweets. This week’s episode of The Guardian’s Tech Weekly podcast features a 40-minute interview with Davis, and it’s a fascinating listen.

The interview covers the full timeline from Davis’ isolated youth on the Shetland Islands, through his time with Anonymous and LulzSec and his incarceration in a young offenders’ institution and onto his release and his rediscovery of the Internet after a lengthy, court-enforced ban. Davis appears full of remorse for his actions and says he regularly warns young people from making the same decisions he did. Give it a listen.

Read next: Google Search for Android now lets you say 'Ok Google, take a photo' or 'take a video' to launch the camera app