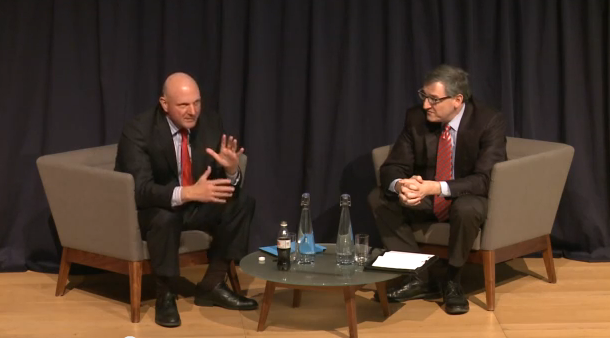 A month to the day since Microsoft announced Satya Nadella as its new CEO, Ballmer made an appearance at the Saïd Business School, part of England’s Oxford University, where he talked about many things with his long-time friend Professor Peter Tufano, who’s now Dean of the School. And there was advice aplenty for the entourage of students in attendance.

When prompted by Tufano about what advice the Ballmer of today would impart on the Ballmer of several decades ago and, indeed, any budding young entrepreneur in attendance, this is what Ballmer had to say.

“I dropped out of school to join Microsoft, mostly because I knew Bill Gates from college, and he was the smartest guy I knew,” he says. “So I knew Bill, and his buddy (Microsoft co-founder) Paul Allen, and they were kind of world-leaders in something that I didn’t quite understand, but it sounded good. And these guys were really smart, and that sounded even better.”

Indeed, it’s this criteria Gates points to as being central to setting up your own business, or joining someone else’s. “There are a lot of criteria you might want to think about, but being world-leading at something big, with smart people, that’s a good place to be,” he says.

Working with smart people is one thing, but how do you actually get the smart people? It’s all about the recruitment.

“If you’re going to be a small company in particular, everybody’s a recruiter. Everybody’s out there, ‘Who’s the best?’, ‘Who’s the brightest?’, ‘How do we get them?’. It’s the life-blood. Even up until the last minute at Microsoft, the last thing I did was a recruiting call.”

The third and final core piece of advice for startups and entrepreneurs was perhaps about as specific and practical as you could imagine.

Over and above all this, however, Ballmer talks about the importance of understanding ‘price’.

“You know, you take all these fancy classes in lots of things, people will want to teach you about marketing, and they’ll want to teach you about finance, and now there’s a whole CRAZE about product development,” says Ballmer. “But this thing called ‘price’ is really, really important. I still think that a lot of people under-think it through. You have a lot of companies that start and the only difference between the ones that succeed and fail is that one figured out how to make money, because they were deep-in thinking through the revenue, price, and business model. I think that’s under-attended to generally.”

“If you’re going to be one of those people who do their own startup, I guarantee you that unless you’re all-in – not ‘all-in for six months and see how things go’ – no startups do that well that quickly,” continues Ballmer. “You gotta be in, and stay in and take a long-term view. And that’s the best piece of advice I ever got.”

And what about the worst? “A bunch of people while I was at Stanford told me not to drop-out and join Microsoft,” adds Ballmer. “That would cosmically be the worst piece of advice I ever got.”

It’s just as well he didn’t listen to them.