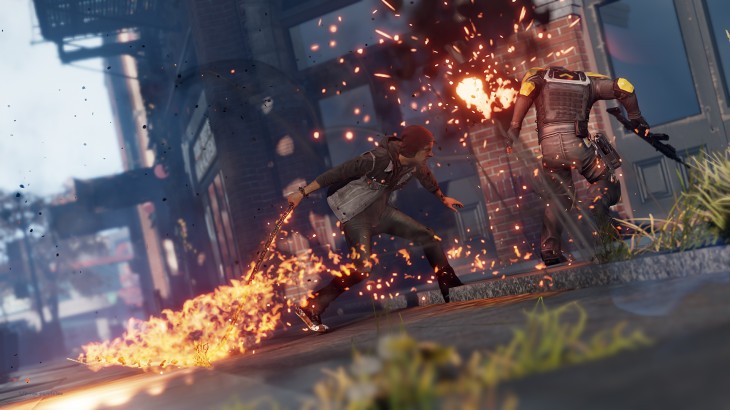 When the PlayStation 4 launched last year, it lacked a full stable of launch titles to show off its remarkable potential. Infamous: Second Son launches in North America on March 21, managing to barely squeeze into the console’s extended launch window, which runs through the end of March.

While Second Son draws on the same universe of the first two Infamous games, it’s designed so that you can follow the story even if you’re new to the franchise. Studio co-founder Brian Fleming, who is serving as a producer on the game, described Second Son as a relaunch for Infamous.

The premise of the game is that a subset of Earth’s population, called Conduits, can utilize superpowers by pulling in energy from the environment around them. Sucker Punch’s demo and hands-on centered around two separate missions after protagonist Delsin Rowe acquires a new superpower allowing him to manipulate neon light. Depending on whether you chose the path of good or evil, the mission will take place with different locations, objectives and play styles.

With a little more than a month left before it ships, the version of the game we played was mostly complete, but the in-game interface had yet to be finalized and Delsin’s superpower energy was set to unlimited.

Based on our hands-on time, the game looks fabulous. The environment offers a gritty re-creation of Seattle with plenty of opportunities to explore and interact.

The Neon power is more projectile based, while Smoke is designed for more close combat. Sucker Punch admitted it has been tightlipped about how many other powers Delsin will acquire over the course of the game, but the developer did say that we have plenty to look forward to.

While the Infamous series is known for the role that moral decisions play in affect the outcome of the game, Sucker Punch has tightly integrated those decisions into the combat aspect of Second Son. For instance, you’ll have a choice whether to kill hostiles by shooting them in the head or simply incapacitating them by shooting them in the kneecap. When enemies surrender, you’ll get to choose whether to execute or subdue them.

Sucker Punch has shown off how awesome it is to blast away with superpowers in Second Son, but I’ve been curious how the game balance will work. Since the hands-on demo was set to easy, I asked Second Son Director Nate Fox about what the studio did to make the game challenging.

“Everyone thinks the most fun thing in the world would be to fly and disintegrate people with a glance, but God Mode is only fun for 30 seconds,” he said. “Delsin’s powers come from the environment. He harvests them from the city itself, but he runs out. It puts you in jams. You’ll need to go reload.”

Sucker Punch relied on the city as inspiration for creating truly new superpowers.

While you see plenty of comic book, movie and game heroes with fire-related powers, smoke isn’t as common. That gave the team an opportunity to implement new gameplay experiences for gamers like jumping through air vents and shooting out through a smokestack.

Since Delsin can absorb the powers of other Conduits, Second Son’s designers had a blank slate to come up with new powers for him.

“People come to the Infamous franchise to be able to play with superpowers. Letting Delsin absorb the powers of the people that he comes across just means that he gets a wider set of toys.”

The chance to discover and wield new superpowers is exactly the kind of experience that drew us to gaming in the first place. From the looks of it, Infamous Second Son is set to deliver the first truly next-gen experience for the PS4 when it arrives next month.

Read next: LG teases the G2 MINI, a smaller version of its flagship Android smartphone ahead of MWC