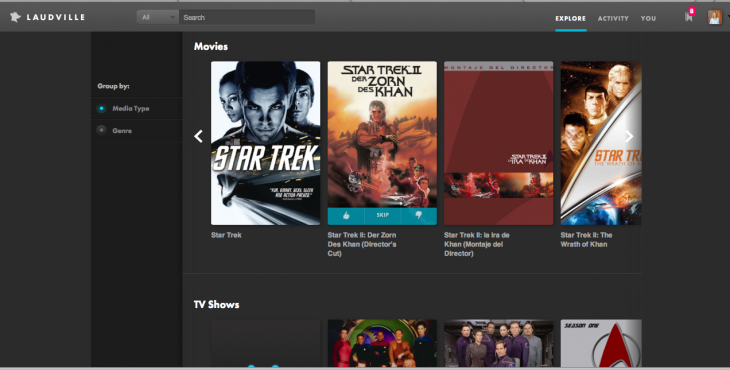 Laudville has wrapped up its open beta and officially launched its social discovery service for movies, TV shows, music and books. The site helps users find entertainment through a learning algorithm and friends’ recommendations.

To mark the milestone, Laudville has also released an updated version of its service with new features such as a friend-finder, Twitter widget, user histories and a redesigned portal. The site began its open beta last July.

Laudville CEO Phoebe Scott started the company because she couldn’t find a solution that brought together recommendations based on her specific tastes and opinions of her friends. Scott described the resulting product as “Yelp meets Kayak for entertainment.” It’s meant to show users where they can find a piece of content while also displaying recommendations from people you know and/or trust.

While Laudville has nice design and the right approach, its biggest weakness is the lack of integrated services. The site includes content from Amazon, iTunes and Hulu, but it doesn’t yet have data from popular streaming services like Netflix, Spotify and Rdio. Also missing from Laudville is a mobile app, though the startup says it plans to release one in the next six months.

If Laudville manages to build a comprehensive personalized hub for where to find digital content, it will have a killer app on its hands. The odds are stacked against it, but, at least for now, it’s off to a good start.

Read next: Kik settles on its model for growth and revenue: a messaging app with built-in Web browser