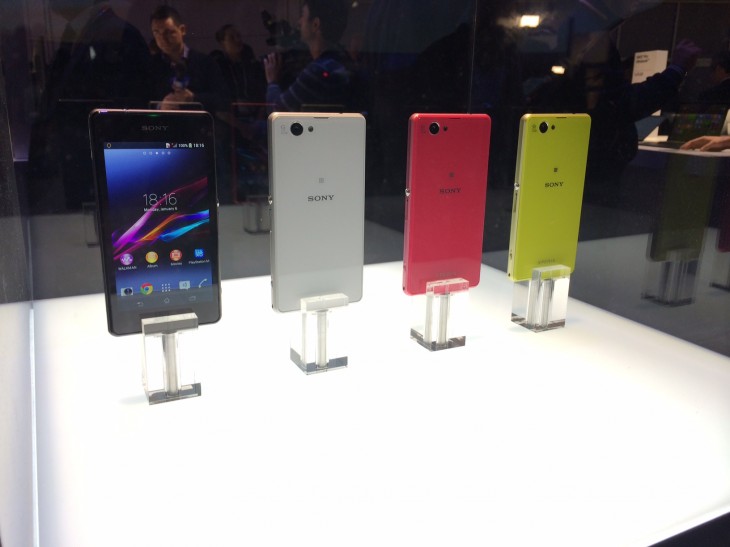 The new smartphone will have Android 4.3 Jelly Bean installed and be available in four colors. Sony says it’s launching globally in February. The price has not been disclosed yet.

In touting the Xperia Z1 Compact, one thing that users may find interesting is the various social camera apps that Sony has installed onto the device:

The smartphone also comes equipped with a new sensor sub-system that opens up an opportunity for developers to find out what they can do with their apps, such as play with step detection, activity recognition, smart power management, and more. The company has released several APIs and an SDK to aid developers.

Sony also unveiled a second phone that’s exclusive to T-Mobile in the US. Called the Sony Xperia Z1S, it’s also waterproof and contains a 20.7MP camera. Available for $528, you can buy it online starting Monday or pick it up from T-Mobile stores nationwide from January 22.

For the most part. the Xperia Z1S is similar to the Z1 Compact, but has a larger battery (3,000mAh) and also has more storage (32GB). As mentioned before, this model is waterproof, meaning that Sony is hoping that it becomes a regular work and personal phone for customers to use and abuse as they see fit.

Considered by some to be Sony’s flagship model, the Xperia Z1S comes with a 20.7MP camera and will be equipped with the PlayStation app and other camera apps as mentioned earlier.

As added incentive to make a smartphone purchase, Sony is bundling the Z1S and the PlayStation 4 together. For those that get these two devices, the company will give them a $100 gift card to buy whatever they want.

Read next: Sony unveils the SmartBand, a wearable device that tracks more than just physical activity