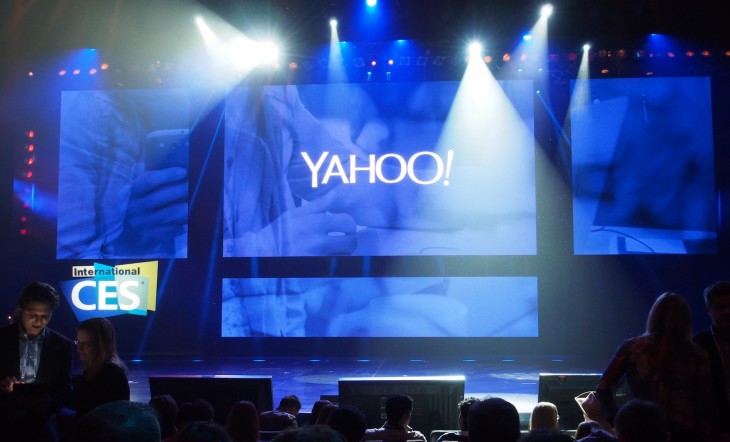 Yahoo CEO Marissa Mayer made an appearance at the 2014 Consumer Electronics Show, delivering a keynote address aimed at telling marketers, investors, and everyone else about the future of her company.

This was Mayer’s first address at CES following her naming as CEO of Yahoo, and she came armed with a star-studded cast for her bevy of announcements.

Mayer said previously that the company saw more than 800 million monthly active users on its various services, spread across mobile, mail, and search. During its Q3 FY2012 earnings call, she highlighted that the company was going to be moving into a more coherent mobile strategy aimed at those people who find their daily activities to be done on a smartphone device.

Among the lineup of new Yahoo products, it is clear Mayer aimed to refocus Yahoo as not just a technology company, but a media company. It aims to do so by highlighting products that emphasize “Search, Communications, Digital Magazines and Videos.”

According to Mayer, Yahoo surpassed 400 million monthly mobile users this past fall – and that’s excluding Tumblr users. She also said Yahoo has implemented SSL Protocol for email and ads as of last Friday.

To complement this, Yahoo announced its acquisition of Aviate to further develop search and mobile app’s home screen. Upon launching the Yahoo app, users can now find local and personalized data that are recommended based on the user’s behaviors and current surroundings.

Summly’s Nick D’Aloisio joined the stage to announce Yahoo News Digest, a news app that provides two daily summaries, one in the morning and one in the evening.

The app provides clusters of top stories from each category of news (World, Sports, Arts, US, for example) and summarizes the stories, extracting information from multiple sources.

We’ve already heard that Yahoo was going to be  launching its tech vertical this year, and the digital magazine officially launched with the site’s director, David Pogue. He touted that the magazine has a lack of display ads, instead using sponsored posts as a form of native advertisement.

Additionally, Yahoo launched Yahoo Food – both the Food and Tech magazines will be powered by photos from Flickr.

Yahoo’s Senior Vice President of Mobile and Emerging Products Adam Cahan said half of the live content stream came from mobile. To build on this growth, Yahoo launched its Yahoo Smart TV app along with a guide technology to help personalize content recommendation.

Tumblr’s David Karp took the stage to announce that Tumblr was now the number one site for engagement, according to comScore. Karp also announced that Tumblr sponsored posts are now powered by Yahoo advertisements for more detailed targeted advertisement that felt more native and appropriate.

To wrap up the keynote, Mayer brought out one of the performers from summer 2013’s Yahoo on the Road concerts series, John Legend, to perform and remind audience members that Yahoo is still very much about entertainment.