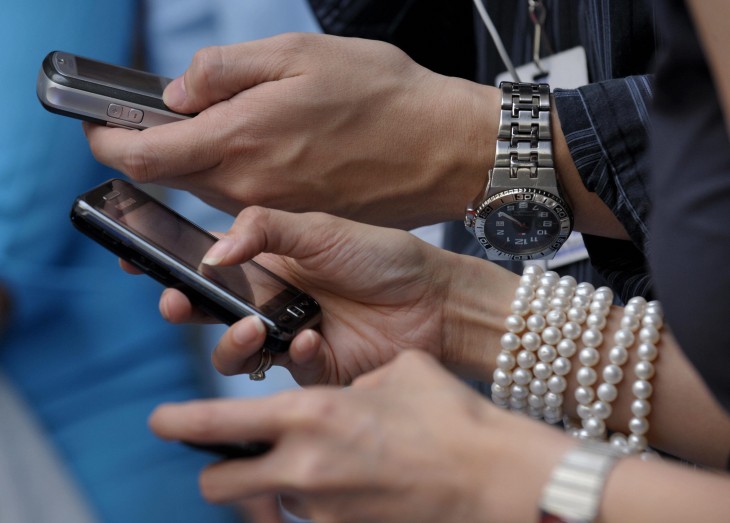 What passes for an innovative mobile product these days? The folks at Mobile Future wanted to find out, so they hosted a competition called The Mobileys to look for ways to support the best startups in the space. Yesterday, the organization selected an app aimed at helping save lives as the winner of its inaugural event.

At stake was a $10,000 prize that would be awarded to the mobile app that made the world a better place. The victor was a service called Page-Out that specializes in helping police, fire, and medical emergency personnel assembly staff quickly. Other winners include HeadsUp!, a windshield-mounted communication display so you don’t take your eyes off the road, and Learn with Homer, an educational reading assistance app for children.

In addition, a People’s Choice award was also issued, going to INRFood, which helps consumers better understand what they’re eating.

In its first year, the Mobileys is a competition geared towards finding those entrepreneurs seeking to “make a difference through mobile innovation.” It was started by Mobile Future, a membership organization making investments in the wireless sector. Members include Alcatel-Lucent, AT&T, Ericsson, the National Black Chamber of Commerce, National Gay and Lesbian Chamber of Commerce, Qualcomm, and Verizon Communications.

In total, ten startups were selected and advanced to the finals. Each were evaluated on specific criteria, including whether it was a “game changer”, if it was socially beneficial and make a difference in people’s lives, and if there was a chance of success with additional resources.

The judges consisted of Kathryn Finney, the founder of DigitalUndivided and a White House Champion of Change, Nancy Pfund, Managing Partner at DBL Investors, Diane Smith, angel investor with Frontier Angel, Jonathan Spalter, Chairperson of Mobile Future, Roell Vento, CEO of The Silver Fox Studio, and myself (a-ha! The disclosure!).

Here is the complete list of finalists from the inaugural competition:

Bold Guidance is geared towards helping high school students complete their college applications by providing them a way to track their progress. In a way, it’s akin to an admission checklist to help students, parents, and educators monitor activity to ensure everything is addressed.

The company believes that it’s the only service focusing on a niche problem: specific individual college applications and automates the process right from the mobile device. It utilizes a SaaS model to simplify the process by automating the aggregation of each college application’s components, deadlines, and requirements to keep everyone on task and offer reminders about upcoming deadlines.

With its goal of reaching 15,000 students in the United States next year and 150,000 by 2015, Bold Guidance is growing its team by hiring developers, a sales force, and forming partnerships with TRIO Program, a federally funded college access program for low-income youths across 10 states.

Bold Guidance is already in beta and launched across 12 high schools. It hopes that with funding from The Mobileys, it will be able to advance its progress and develop a tutorial to help educate others on college terms and improve students’ knowledge on the admission process.

Aimed at helping to address vision problems by providing exercises for patients to do on their own, the G-Labs Vision Therapy app was conceived following an eye exam that its founder had. It turns out that Doug Gerull’s vision was deteriorating and in an attempt to improve it, he realized that the current state of tools available for therapeutic assistance was photocopied pieces of paper.

The app provides a few eye exercises for patients along with a library of resources that optometrists and vision therapists can utilize. It was formally unveiled at a trade conference, which the company says was very receptive of the project and expressed interest in incorporating into other clinics.

When combined with a stand and a stereoscope, users can view stereoscopic images in 3D right on the iPad. While conducting these exercises, the app is collecting information about the patient that may be important for the therapist.

G-Labs intends on officially launching the app in January 2014 and says that it will use any prize money to improve its app.

Tackling the dangers of using mobile devices while driving, HeadsUP! hopes to be the next innovative navigation service that functions similar to what you would find with the connected cars from Ford, BMW, and others. The one exception is the placement of the device — it’s on your windshield instead of on the dashboard.

With its technology, HeadsUP! claims to allow drivers to maintain their focus on driving and prevent downward glances and potential distractions. It will allow all text, calls, and social media activity to be managed through the use of voice, powered by the phone (e.g., ‘OK Google’ commands).

The company is still completing its fifth prototype, but says that in the “coming months”, it plans on further refining the product and adding more features. Any prize money would go into research and development, along with helping to raise awareness of why it’s better for mobile communication.

INRFood is a mobile application created by Keval Mehta to help consumers better understand what they are eating. The company explains that the problem in the US is that food labels require a “PhD in biochemistry” to understand. The app has a database of 300,000 products, along with 15,000 researched ingredients.

Launched in beta this September, INRFood allows users to scan the barcode of food items to understand what went into it. It lists the ingredients and advises you which is best for your particular diet, whether you’re gluten-free, diabetic, or anything else. To date, the app has 70,000 users and expects to be out of beta soon.

The company tells us that it spent two years working on its database and algorithm to get it to work for all users, but one particular challenge it faces is the various product changes.

When launched, users can expect to see the full version integrated with wearable technologies, such as Fitbit, Jawbone, and Withings. By the end of next year, the company hopes to increase its customer base to 5 million users.

INRFood is completely bootstrapped and plans on using any prize money to help it add new features, expand to new markets, and potentially open up an API for third-party developers.

The Launch Trainer app appears to be geared towards entrepreneurs, giving them a one-stop shop on how to kickstart their company. Started by Howard University graduate Nena Ugwuomo, it connects users with resources based on their geographic location, specifically startup training opportunities (e.g. workshops and classes on HTML, CSS, pitching, etc.) and nearby events relevant to their venture (e.g. FOCUS 100 symposiums, LATISM conference, hackathons, etc.).

Leveraging big data, Launch Trainer will take information supplied by the entrepreneur and render a customized coaching plan to assist them from start to launch.

The company itself plans on launching in March 2014 and Ugwuomo says that she hopes that it will help launch 1,000 companies before the end of that year. She will be using any funds to invest in product development, testing and any intellectual property.

An education mobile app, Learn with Homer wants to help children learn how to read, but in an interactive and engaging way. Targeting families of children ages 3 to 6, the app contains a library of classic stories, songs, and nursery rhymes along with vocabulary lessons and more. Children will learn these lessons by playing games, reading along, and even drawing in the app.

Started by Stephanie Dua, Learn with Homer appears to be naturally suited to helping children learn because they’re accustomed to using an iPad.

The company is in the process of building a publishing tool and a platform to enable its user community to produce their own stories and lessons. By the end of 2014, Dua says that the company will have a full reading curriculum for kindergarten, a “significant” presence in households and classrooms, and a growing set of contributors of user-generated content.

Ever hate waiting in line? Remember going to restaurants, placing your name, and the hostess gave you that obscure device that vibrated when your table was ready — but required you to stay nearby? Lineapple is an app that turns your mobile phone into that same device, but implements what it calls “wait intelligence”.

What it does is provides users with the necessary information to see whether they want to stop by their favorite restaurant or business. It tells whether there’s a line, the expected wait time, and will notify them when their spot is ready. No more physically queuing up.

The company says that its next steps include looking for large businesses to partner with and to “bulletproof” its application. It already has small businesses using the service.

A 24/7 on-call service, Page-Out is primarily geared towards better connecting those workers who find themselves needing to be available at a moment’s notice. An idea borne from a fire department captain who found himself needing to bring in staff to help combat a fire, Page-Out enables emergency responders to use their smart phones to let others know where they are and who’s available when a call comes in.

The company says that the administrator of the account goes to Page-Out’s website and adds users who will need to communicate with one another. Then, all workers can download the Page-Out app on their Android and iOS device and that’s it. It functions like a cloud-based roll call system, which can expedite finding what resources you have during moments when time is of the essence.

Page-Out officially launched in September and has more than 20 departments testing its system. Its goal is to have 40 fire departments in Kansas signed up to use it by the end of this year. Eventually it aims to expand its reach across the 37,000 volunteer fire departments in the US, as well as other emergency medical services.

The service costs $29 per month to use.

A healthcare-centric app, Vheda Health is looking to address chronic disease care and prevention using a mobile device. Functioning akin to what Google Helpouts and Doctor on Demand offer, this app allows you to remain connected with your primary care physician to manage your disease.

The company plans on rolling out its service to three customers by the end of the year and intends on bolstering its sales and marketing efforts to attract more healthcare organizations. Naturally, any prize money will go towards helping scale the platform and be invested in research and development.

A wearable messaging device platform, Wearably enables publishers and media companies to tap into the growing segment of smart watches and glasses to easily push apps to those devices. It claims to be able to deliver a developer’s app through a publisher’s RSS feed on several supported devices, including Google Glass, the Sony Smartwatch 2, and eventually the Samsung Gear.

It believes that its SaaS platform will benefit publishers because it will allow their content to be displayed on wearable technology devices much faster than their competitors. It uses the existing Content Management System, RSS feeds, or API to generate custom apps. For consumers, they will receive headlines, images, and short videos from their favorite sites while on the go — almost like Flipboard for your watch.

Wearably is looking to form new partnerships in the future and will be rebranding its app soon. It hopes to have 30 “high-profile,” paying  clients signed up in a year. The prize money would be used to help increase the company’s runway .

Read next: Amazon Coins can now be gifted to other people for purchasing content in the Amazon Appstore