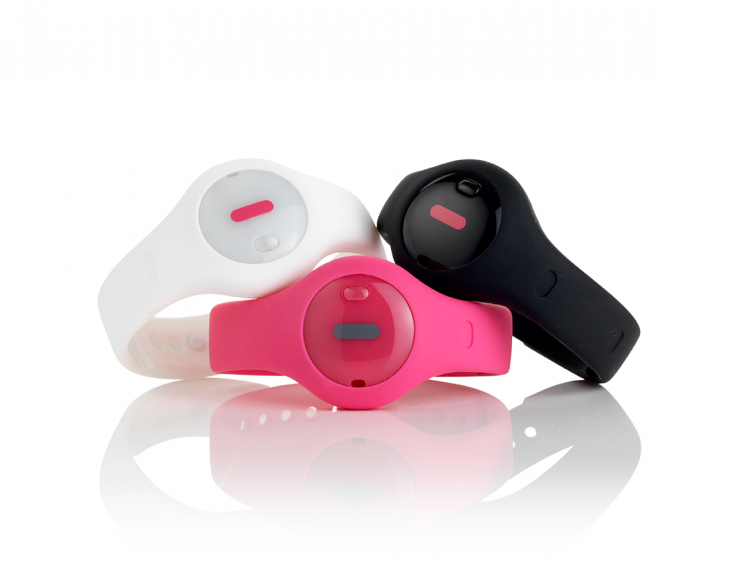 Nike+ FuelBand SE, Withings Pulse, Jawbone UP, Fitbit Force. You can take your pick from the myriad of activity-trackers permeating the fitness sphere, each offering broadly similar feature sets, but with their own nuances to cater for different tastes.

With such a saturated market, is there really room for one more? Well, the good folks at London-based Fitbug certainly think so, recently rolling out the wallet-friendly Fitbug Orb to tap what’s clearly a lucrative market.

At $50 or your local currency equivalent, the Fitbug Orb has shaved at least half the retail price off the Withings Pulse, Fitbit’s offerings and the Jawbone Up, and two-thirds off Nike’s incarnation. But at that price, it surely must be cutting corners, right?

We take a look.

One thing that works massively in the Orb’s favor is the choice of wearing options – out of the box you get a watch-style wrist-strap, belt clip, and another wrist-strap which looks like it’s designed to be worn loosely around your, well, wrist.

This versatility is definitely a good thing, given the inherent rigidity of its counterparts, which can typically be worn like a watch or a pedometer, but not both.

Another key differentiator here is that there is no built-in rechargeable battery. With the Orb, you open the back with a coin and simply replace the CR2032 button cell lithium battery every six months or so.

There are pros and cons to this – sure, you don’t have to worry about recharging your unit every few weeks, but at the same time you could be caught somewhere far from a 24-hour shop. And even then, it may not sell the correct type of battery.

However, a CR2032 two-pack costs around a dollar, so it’s not difficult to stock-pile quite a few of these.

The Orb is about the same dimensions of a medium-sized button – it’s small – and is about as light in the hand as you could expect. Indeed, it’s a pretty innocuous and unobtrusive piece of kit.

Now, we’ve talked about the Orb’s price-tag. $50 isn’t much, and one of the reasons it has managed to keep costs down is through swapping a rechargeable battery for a replaceable one. But over and above this, it has also kept the ‘interface’ as simple as possible.

Indeed, unlike the Withings Pulse or Nike+ Fuelband, the Orb has no screen to speak of – it has a single light and one button. Any information you need from your tracked activities must be garnered from the accompanying apps through which you sync the unit (more on that below), which is akin to the Jawbone UP.

How you wear your device will likely depend on what you’re doing – as a pedometer, the Orb will be best clipped to your hip or placed in your pocket. If you’re doing something a little more ‘active’, then you’re best strapping it to your wrist.

So, that’s what’s in the box, let’s take a closer look at what this puppy can do.

Setting up, tracking and syncing

The Orb tracks steps, sleep, calories burned and motion, and then sends this information wirelessly to your Fitbug account.

Now, there are two ways to sync the Orb to your account. You can beam the data via Bluetooth to the iOS app, or you also send it directly to your PC or Mac via the Fitbug Bluetooth dongle, which is available separately for $14.99. 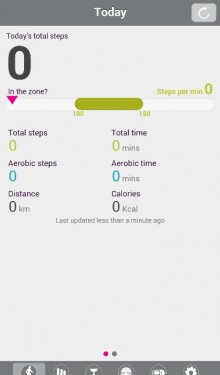 Initially when setting up, I’d do exactly as requested, but the phone and the Orb would never talk to each other, even though I use the S4 to sync with a number of other contraptions with Bluetooth. By sheer chance, I opened the Android app one day and for some reason the Orb was suddenly listed in the Fitbug app’s profile, replete with data, but it has never managed to sync for me after a week of using it, even though it does display data as synced through the iOS app.

Syncing issues aside, the app still leaves a lot to be desired – it will sometimes display with the bottom edge cropped off as you can see here. The word ‘buggy’ very much springs to mind here.

In the iOS realm, the Fitbug Orb is compatible with the iPhone 4s, iPhone 5 variants, iPad 3, iPad 4, iPad mini and iPod touch 5. For the purposes of this review, I synced up with an iPad mini.

There are actually three ways to send your stats – you can press the button once, and the light will turn green thus indicating your stats are en-route to your account.

Then there’s a feature called Beacon, which lets you send your data throughout the day automatically at pre-set intervals. You can set these intervals from your main profile, and can be anything from every fifteen minutes to every three hours.

Lastly, you can also stream the data – this means you send your steps to the app as you walk, so you can view your progress as you move in real-time. To do so, press the button twice and the light will blink every five seconds.

In terms of actually setting your Orb up to work with the app, well, in our view the instructions could really be better.

For example, once you’ve created your account (which you must do first), and clicked to add a device, it asks you to enter the last five digits of your serial number. It doesn’t mention what this number should look like, or where you can find it.

This may seem like a minor point, but it’s often the little things that make all the difference. If you’re already getting a little annoyed before you’ve set things up, it doesn’t bode well for what’s to come.

For the record, the serial number it’s referring to can indeed be found on a little sticker on the rear of the Orb.

Once you’ve noted the relevant numbers, you enter them in the over-sized box and click ‘Pair’. Then, press and hold the button on the Orb, and it should sync at the first time of asking, but it did take a few attempts for me on the iPad, and as noted already it never did seem to work on Android.

It’s worth adding here that the ‘Pair New Device’ message varied for me – sometimes it mentioned the Air (another Fitbug device), sometimes it didn’t. There didn’t seem to be any rhyme or reason for this variance.

At this juncture, you can add in your weight and stride which helps Fitbug calculate things like distance traversed and calories burned. You’ll also need to complete your profile and include information such as height.

And it’s here you can also tweak your settings for Beacon mode, so that the Orb automatically beams your data at set intervals. Then, it’s really just a case of wearing the Orb and letting it do its thing. The most prominent section in the menu is ‘Today’, which gives you a snapshot of how you’ve been doing and, we’re pleased to report, it was pretty accurate.

I verified much of the data over the course of a week with a GPS app, and it was as accurate as any other similar tracker including Withings Pulse and Nike+ FuelBand.

You’re also given a historical view of your data, but it seemed restricted to a week at a time – it would’ve been good to tailor a time-frame exactly to what you want, such as ‘this month’, ‘this year’, and so on.

One of the big plus points of the Orb is that it tracks your sleep too, much like the Withings Pulse does.

To track your sleep, press the button three times and the light will flash to let you know that sleep mode has been activated. To cancel (e.g. when you wake up), hold down the button until the light flashes again; or, alternatively, just walk fifty steps and sleep mode will turn off as if by magic.

The first time I tried this, the Orb didn’t actually beam the data to the app, even though I was 100% sure I had activated it correctly – all the lights did the right thing at least, and I can’t see any reason why I could’ve messed it up. However, it subsequently did work for me, so I’ll put the first time down to gremlins.

Over time, you’ll see your sleep data presented by ‘total’ and ‘quality’, so if you moved around a lot during the night, it will factor this in to the data.

It will even present the sleeping stats in graph format for serious data junkies.

The final piece of the Fitbug Orb puzzle relates to nutrition. Though the Orb itself has nothing to do with tracking your food intake, the broader Fitbug ecosystem caters for this, and you can include all the food you eat through your Web account.

This is obviously still relevant to the Orb, given that exercise and eating are inextricably linked, so this is one more brownie point in favor of Fitbug.

We’ve covered quite a lot of ground, so let’s take a step back and look at exactly what you’re getting for your hard-earned $50.

The Fitbug Orb offers a pedometer-style clip-case and watch strap – so you get the best of both worlds here and this will appeal to many people. However, it’s clear where the savings have been made compared to its slightly-more-expensive compatriots.

Even though I couldn’t sync the Orb up with the Android app with a supposedly compatible device, the list of compatible devices is still scant – for all intents and purposes this is really only compatible with iPhone 4S and above, iPad 3 and above and iPod touch 5, and a handful of Android devices (if you can get things working).

Sure, you can fork out another $15 for an adapter to make this compatible with your PC, but that partly defeats the purpose of this budget device. In time, of course, more mobile devices will be supported by the Orb, but until then this will likely have limited appeal when you consider something like the Withings Pulse will set you back just $99 for more extensive mobile support, though admittedly it can’t sync to PCs at all.

Another slightly annoying feature is not being able to be logged-in to the app on multiple devices. If you normally use your iPhone, but decide to sync up with your iPad because it’s closer to hand, you are effectively logging yourself out of the iPhone app by doing so.

Moreover, the lack of any screen will also deter some people here – you can’t use the Orb as a standalone device like the Pulse or the FuelBand. And you will have to change batteries every six months or so (depending on usage), which isn’t ideal.

The Fitbug Orb is what it is – it’s an affordable, versatile, unobtrusive fitness-tracker. It does what it says it does (mostly), and it even lets you track your sleep, a feature that’s missing from most other trackers.

Its big selling point, if you’ll pardon the pun, is the price. For $50, you’ll be struggling to find better value for money, even though it may lack some of the functionality and design finesse of its activity tracking brethren. And we really hope it can solve the syncing issues too.