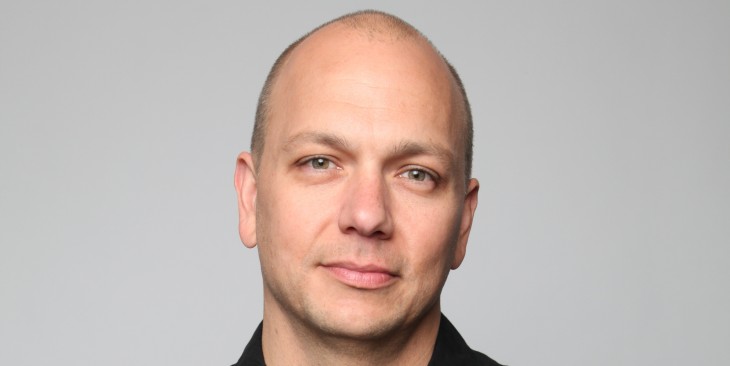 What’s the very first thing you do when you meet one of the ‘fathers of the iPod‘?  Complain about central heating, that’s right.

Tony Fadell, co-founder of Nest and former Senior Vice President of the iPod division at Apple, is sitting across the table from me in the restaurant of a central London hotel. He’s on his way to the Dublin Web Summit, but we thought it was high-time we caught up with the former Apple-exec and now CEO of Nest, his company on a mission to make unloved household items like the thermostat and smoke detector smart and beautiful. But before we got to catching up on how the UK launch of Nest’s Protect smoke alarm is going, I had a personal gripe to get off my chest.

Why, Tony? Why is Nest’s thermostat still not available in the UK? Someone has to come and moan at you in person.

“All the way across the pond, we hear your moaning. We really want to. Trust me, if you Brits weren’t so different from us Yanks when it comes to heating we would have been here a long time ago. But seriously, it’s very, very different – the way you think about heating and the way you control it – than in the US. I thought we were going to be here a lot sooner. But after we did 200, 300 homes worth of research – going in and doing installs and [seeing] how people think about it – so many things had to change that it just wasn’t as easy as dropping the product in and saying ‘go for it’. These things aren’t USB mice. Nothing like that at all.”

So it’s about education?

“We have to educate, we have to change our marketing, we have to change, in many ways, – and the product itself – how we come to market here. So, it’s not just marketing and not just getting it to work with the boiler, but also about getting people to think differently about how they control it because it’s not just a one-for-one swap; you actually have to remove all kinds of things to get this thing out of there. You can’t also do it yourself, there is no do-it-yourself here like there is in the States. In the States, 95 percent of people do it themselves, out of the box, 30 minutes or less, no problem. Here, they all require professional installations. You have to make a professional installation network. I have to build a professional installation network.

Very soon here, very soon, will you see one, but that’s all I can say. We’ll save that conversation for another day.”

“I hate the word smart, it’s overused. Most things that claim to be smart are absolutely frickin’ dumb.”

So obviously, your thermostat and Protect smoke alarm are replacing unloved household items – did this come from a sense of personal annoyance or was it recognition of an opportunity or demand?

It’s in the media about people fighting over the thermostat. ‘Turn it up’, ‘turn it down’, ‘I’m cold’, ‘I’m too hot’ and then, ‘I can’t stand the smoke alarm’, ‘It woke me up again last night’ or ‘It goes off when I cook’ or ‘It goes off when I take a shower’ – these are things that we’ve learned to live with and suffer in silence or have some comedic outlay in sitcoms or whatever because it’s so bad. These are problems that we’ve learned to live with, we’ve adapted to it.

We think because there is new technology, because we have high volume consumer electronic products like smartphones, where we can take those guts and deploy them into things that haven’t yet been reinvented; we can bring a whole new experience to these things that are really annoying and have been pain-points for years, and all we do is laugh because we didn’t think there was any choice. We didn’t think there was a better way.”

Look at your TV, how dramatically has that changed since you grew up? Look at your phone… Why oh why, aren’t the other things in our lives starting to change just like those? It’s because those commodotized old industries have never got off their duff to reinvent them, and frankly they can’t reinvent them. They wish they could but they don’t have the technology or the talent or an understanding of how to build smartphones. It’s going to take people who understand how to build smartphones and connected services to build these products. And those [old] companies are not attractive to hot young talent who want to go do startups or go somewhere it’s really cool. We’re trying to make it cool, and so the reason why I wanted to start this business was — one — because I knew this was inevitable, but the other thing was the world rose up.

The world said ‘Tony, here’s a check just go do this’. People would show up at my door and say ‘I want to work again, with you, let’s go reinvent something’… so there was this whole yearning, there’s so many other products that can get reinvented. We’re going after the thermostat space and the smoke alarm space, they haven’t changed in 40 years.”

So, do you think there will be more interaction between smart devices? For example, if your phone or other device can sense you’ve got a cold or are ill, will it then relay that information to your smart thermostat to automatically adjust the heating accordingly, or things like that?

“Maybe, maybe. I’m sure a lot of people are thinking that, but we’re taking a huge stretch here. I hate the word smart, it’s overused. Most things that claim to be smart are absolutely frickin dumb.”

What word do you use instead of smart?

“We call it conscious. Conscious means I understand what you like and what your experience is and I adapt to you, not the other way around.

I want to make sure we’re dealing with products that matter, that we’re solving pain and that we’re not talking about connected anything – we’re talking about true new experiences with old stuff. Just like the iPod, just like the iPhone; totally new experiences but if you looked at it you go ‘oh, it’s a phone’… But at the end of the day, how did those products change? Through apps, software downloads and connected services. The iPod is not the iPod of 2001, it’s a whole different product, and the iPhone didn’t even have apps to begin with, it had some built in ones, now there’s millions of different choices. You didn’t know it was going to become a flashlight, a level, a compass, a way to find every car or every home in the world to rent. You didn’t know that when you first saw it.

How will these things change over time? How will your home change over time when these things are adapting to you and are becoming a platform for what you want them to do. So will these watches talk to this [thermostat or smoke alarm]? One day, but that’s not what people buy. That’s for some research guys to go off and have fun with.

“At Apple, I learned about experiences”

We’re talking about mass market here… the generations have to learn, it won’t happen overnight. You tell everybody to save energy, it takes a long time. You tell everybody about electric cars and how many years did it take. Same thing with this. It is going to take years for people to learn and adapt. Of course, there’s always going to be B2G businesses – business-to-geek businesses – a very fine market. But it never breaks out. We don’t want to be another one of those, another Kickstarter or Indigogo where you sell 50,000 and then that’s it.”

Both you and your co-founder are ex-Apple, is that focus on the benefits to users and what it enables in peoples’ lives rather than the devices themselves something you brought forward from your time at Apple?

At Apple, I learned about experiences. I learned retail experience, packaging experience, customer service experience – that’s what I brought. Combining my product expertise and experience with those holistic experience is how Nest is what it is today, through all of those different years of training.”

I don’t write a lot about smoke alarms and you might well be delivering new experiences, but it strikes me that Nest Protect is probably more expensive than a standard smoke alarm.

Is that not quite a lot more than a normal one? Are you seeing any resistance or feedback from retailers or customers?

“Retailers are clamouring [to get it], our customers are saying ‘finally!’ Remember, you’re comparing apples and oranges. Comparing something that just beeps and is annoying, to something that might actually be enjoyable or at least bring you peace of mind. 72 percent of fire-related deaths in the UK, people had smoke detectors but they had put them away in the drawer because they were too annoying or the batteries died. But the government mandates them; you have a choice, but one choice you don’t have is not to buy one… And you have to buy a carbon monoxide alarm. So what are you going to buy? You could pay £29, £39 for each of those – you can buy various quality levels, and what do they do at the end of the day? The only thing they do once you install them is just beep at you.

[It’s only more expensive] if you just think dollar for dollar, and [not beyond that monetary] value – like what’s a night of sleep worth to you? Or if you burn the toast, you’ve lost the value of the toast but this thing beeping in your ears in the morning and waking up your neighbours, what’s the value of this [versus] the peace of mind that you can see it’s working each night?”

So, Tony, one more question: What’s still annoying you in your house? (Unsurprisingly, he saw through my thinly-veiled approach)

[Smiling] When I finally showed the Nest Protect to my son, he looked at it and said ‘that’s really, really cool! Then after about a minute he paused and looked at me and said ‘”Daddy, what are you making next?” … and I was like “Aaaaargh, who programmed this kid!? He sounds like me!”

You’re already asking me when I’m bringing two products here, the thermostat and the Protect – when we’ve got those done and in, then you can ask me that question.

Read next: Sony fires 8 million colorful petals out of a volcano in Costa Rica in this stunning ad for 4K TVs