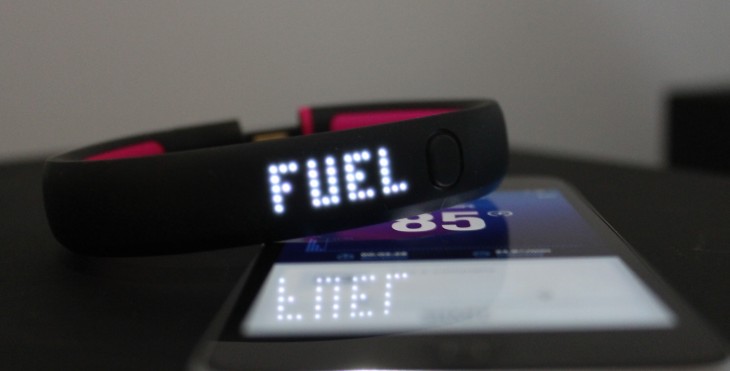 It’s been twenty months since we went hands-on with Nike’s first FuelBand, a wristband that monitors and measures every movement you make.

The tracker also kickstarted Nike’s efforts to look beyond the serious keep-fit freaks and into the realm of everyday activities, producing a whole new metric called NikeFuel which, used in conjunction with the FuelBand, tells you how active you are.

But that was then, and this is now.

Two weeks ago, Nike announced the second iteration of the band, called the Nike+ FuelBand SE, which basically looks and feels the same as the original incarnation, but promised a number of enhancements.

For example, the SE features Bluetooth 4.0, which negates the need to manually sync the band with the FuelBand mobile app – it just happens automatically. Throw into the mix improved waterproofing (it’s still not aimed at scuba divers though) and a slew of new features, we thought we’d dive right back in again and see what this baby can do second time around.

Is the Nike+ FuelBand SE worth 149 of your hard-earned dollars? Read on.

As noted already, the latest Nike FuelBand is basically the same to look at, though its jet black exterior now ships with three color-tinged variants – Volt, Pink Foil or Total Crimson. These colors are visible on the inside of the band only.

The most obvious change to how you interact with the band itself appears when you press the button on the device. Yes, the simplicity of the FuelBand with its single-button function is a good thing, but you will have to re-learn the various ways you use the button to achieve your desired goal.

If you’re familiar with the FuelBand of yore, you’ll know that you press and hold the button to sync via Bluetooth with your iOS device. This is no longer necessary, given that Bluetooth 4.0 is now the name of the game and everything is automated.

Also, rather than pressing the button 3 or 4 times to access the time mode, you now just double-tap the button and the time flashes across the screen. This is one feature that will be landing with an upcoming firmware update for the old FuelBand too.

The other obvious change made to how you use the button relates to a new feature called ‘Sessions’, which essentially splits your day’s activities into segments. Before, the FuelBand would just track everything you do during the day and give you a total figure at the end for steps, fuel, calories and so on. It still does this, but now you can tell it what you’re doing at various junctures.

You can initiate a session in one of two ways. On the band itself, you press and hold the button and you’ll see ‘Start’ flash across the LED – you then have to tap the button once more and it will count-down from 3.

The second way to initiate a session is through the iOS app itself. It’s worth adding here that an all-new FuelBand app will be going live in time for the band’s scheduled shipping date on November 6.

In the main menu section, you’ll see a series of options such as ‘Today’, ‘Activity’ and, of course, ‘Sessions’.

You’ll see a little clock icon at the top-right, which once pressed will let you activate your location and invite other friends before hitting the start button. The app counts down from three, and you’re good to go.

A session can be anything – a run, walk, cycle, baking, cocktail-mixing…anything at all. The app actually comes with a list of common activities, but you can tag your own too, if juggling’s more your kind of thing.

But here is where things have gotten really interesting with the FuelBand SE.

It seems that one of the common complaints before was that key fitness activities such as cycling, yoga and general training (e.g. weights, cross-trainer and so on) would pretty much be impervious to the FuelBand’s tracking magic. Why? Because the technology is based on motion and, well, your arm and body typically don’t move much in the aforementioned activities, certainly not enough to fully ‘record’ the effort you put into it.

That’s why Nike has developed an algorithm that automatically pulls in the relevant number of NikeFuel points for key activities, and then lets you indicate the intensity of the workout, which could be anything from gentle to giving it your all.

Granted, this won’t be 100% accurate, but it certainly goes some way towards tackling the problem – yoga is a very hard, physically-demanding activity, don’t you know? Even if you don’t move all that much during it.

Other activities, including everything from whisking to vacuum cleaning may also find their place in the Nike library of activities. The more people around the world who tag a certain activity, the more likely it will find itself in the repository and tagged with the appropriate NikeFuel allocation. Though for the vast majority of them, you can’t specific the intensity of your ‘workout’.

With all your sessions saved for the day, you can browse back and click on everything you did, to see which activity counted most towards your final fuel count.

Another interesting feature rolling out with the latest FuelBand is ‘Groups’, which are like little silos created among groups of friends and acquaintances, for when you don’t want to share your activity across the wider social sphere.

You can create up to 150 different groups, and while it can be used for simply cheering on friends and sharing data, it’s actually a good way of collaborating and competing on shared activities too.

So, for example, say you and five buddies are all going for a cycle in the hills, or snowboarding or whatever. You each start your sessions at the same time, and can see in real-time who’s putting the most spade-work in. This won’t appeal to everyone, but it’s all in the name of fun and will likely be a hit with many people.

You can unlock achievements not only for your NikeFuel total, but also for Sessions, Fuel Rate, streaks, and more. Achievements are tracked in a new Games section, and more are unlocked with each Milestone that’s reached – this could be one million NikeFuel points, for example.

Again, this won’t motivate everyone, but it’s a useful addition for those who love sparkly bells-and-whistles whenever they’ve hit a goal.

It’s worth remembering at this juncture that Nike isn’t selling the FuelBand as just another fitness-tracker for when you’re playing tennis or running the marathon. It wants to be on your wrist all the time, tracking everything and telling you how you can improve your lifestyle.

With that in mind, ‘Win the Hour’ is its attempt to motivate you to move from your desk every hour and walk to the water-cooler, or climb off your sofa and walk to the shops. It wants to get people out of the mindset of thinking ‘I play badminton intensely twice a week, I’m fine’, into thinking ‘I need to make sure my body doesn’t remain in the same position huddled behind a computer for hours-on-end’.

The FuelBand SE tracks how much movement you make each hour throughout the day, and throws encouragement at you (through flickering LED lights) to get up and walk around. ‘Move’ reminders can be set within the app or on the band itself, and if you manage to move for 5 minutes each hour (or whatever target you set yourself), you’ve ‘won the hour’.

Based on our two-hour hands-on session with the FuelBand SE earlier today, it’s clear that Nike recognizes the need to build out the band’s feature-set. What it has on its hands now is another FuelBand…but on steroids.

Sessions in particular will likely prove popular with all users, while Win the Hour is a nice touch for those who simply forget to get out their swivel chair and stretch their legs every hour. And for those who like the social element of keeping fit, Groups integrates well with Sessions and the broader NikeFuel metrics.

For me, and likely many others, the lack of a distance metric on the band itself is a glaring omission. Granted, the FuelBand isn’t designed as distance-tracker like the Nike+ Running app, but given that steps are converted to mileage within the FuelBand app itself, it surely wouldn’t be too ridiculous to include an extra option on the band for those who like to see roughly how far they’ve walked without booting up the app.

“I think it’s more about staying true to what the product and the experience is intending to deliver,” explained Stefan Olander, VP of Digital Sport at Nike, during a conversation earlier today. “NikeFuel is a more interesting measure than distance, because it’s universal for everyone. To some people, if you like distance, we’ve included it (in the app), but there are other tools that are more precise for that, ones with GPS, this product is better at tracking things around your everyday movement.”

For now, the $149 asking price can be juxtaposed against the $99 Withings Pulse, the new Fitbit Force ($129.95) and the Jawbone Up ($129.99). Nike is sticking to its premium guns, and wants to keep the FuelBand pegged as a superior product, and a subtle fashion accessory for those with money to burn.

People have grown to associate Nike with fitness and the quantified self, and with the FuelBand SE packed with a host of new features, it will likely have a winner on its hands. Though it remains iOS and Web-only for now too, so Android users are still out in the cold. Want to know why? Let Nike’s Olander explain this.

The need to knows

The Nike+ FuelBand SE will be available from November 6 in the US, Canada, and the UK, but will also be made available for the first time ever in France, Germany and Japan.

It will launch in black, color-tinged variants in Volt, Pink Foil or Total Crimson, and each will be priced at $149 (US).

On the same day, the new Nike+ FuelBand app will hit the App Store, catering for the bunch of new features available on the app, and a new firmware update will go live for the old FuelBand too, letting existing users tap some of the new capabilities. This includes new algorithms, the double-tap for time feature, and Group feature (through the app), though data must of course be pushed manually with the old band.

Read next: Researcher hacks counterfeit money detector to accept any piece of paper as a valid banknote