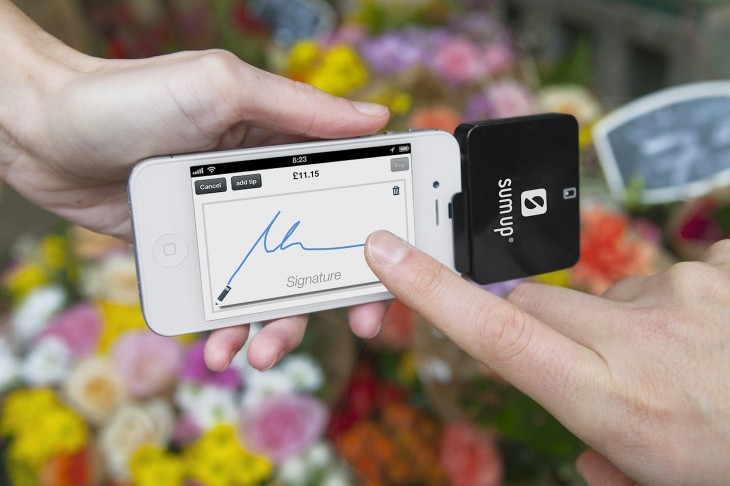 The investment being announced today follows another such ‘double-digit million Euro’ (reportedly $20+ million) Series A financing round closed in the second quarter of 2012, from b-to-v Partners, Shortcut Ventures, Tengelmann Ventures and a group of business angels.

SumUp is often referred to as one of Europe’s answers to Square, alongside payleven and iZettle. Coincidentally, the latter also has American Express on board as an investor, as well as MasterCard.

The company basically helps merchants accept debit and credit card payments from customers with their smartphones and tablets. At present, SumUp only supports payments via Visa and MasterCard, but our educated guess is that American Express will soon be added to the fray now that they’re financially backing the German-British startup.

SumUp is currently available in the UK, Germany, Ireland, Austria, the Netherlands, Spain, Italy, France, Portugal, Belgium and Russia. The company says it plans to use part of the proceeds of the latest funding round to expand into new territories.

The company, which was started in Germany in 2011 but is currently headquartered in Dublin, Ireland, also plans to enhance its main end-to-end payment product. This solution, it emphasizes, encompasses a proprietary and certified payments gateway as well as hardware and operations systems that were entirely built in-house.

SumUp says it will also develop new services and build a point-of-sale (POS) ecosystem that connects merchants and consumers.

SumUp CEO Daniel Klein commented on the funding round thusly:

“We are delighted to bring on Groupon and American Express as financial investors. Both companies share our vision and our commitment to empowering small businesses.

As one of the world’s largest card issuers, American Express is at the forefront of driving innovation in payments. Groupon has proven that it is possible to build a company serving millions of small merchants worldwide in a short period of time.

This unique blend of experiences has been a driving factor for us in taking them on as new investors.”

Groupon’s involvement is a bit of an oddity, however, especially given the fact that they’re sorta kinda competing against the likes of Square and PayPal in the United States.

The European mobile payments space is heating up fast, though, so it’s plausible that Groupon is simply more comfortable getting into the game here by investing in one of the key players, rather than expanding its own service internationally while it has other things to worry about.

SumUp, meanwhile, might benefit from Groupon’s existing relationships with scores of small merchants across the globe, and the fact that the daily deals company has a big international base in Berlin.

For the record, I did ask for a bit more colour on Groupon’s decision to invest in the business, but only received the following, rather bland statement from SumUp co-founder Stefan Jeschonnek:

“Groupon has identified SumUp as an early leader in the emerging mobile payments space outside of the US.

Groupon shares SumUp’s vision to transform the way local merchants interact with their customers and have confidence in the SumUp team’s ability to execute against this vision.”

Hopefully we’ll learn more about the tie-up in due course.

SumUp demos its latest mobile-payments tech for Europe: Order a coffee simply by saying your name

Square ends 2012 processing $10b annually, 40k retailers onboard, looks to expand globally in 2013