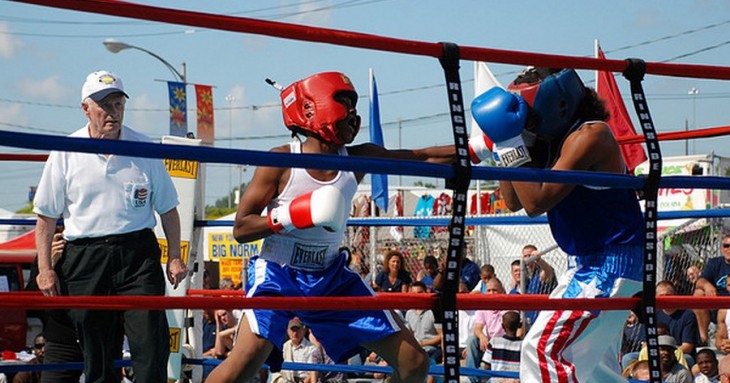 Google CEO Larry Page took a public swipe at Microsoft in his speech at the end of the I/O event’s opening keynote. The remark came as part of a speech that included a call for less negativity and increased interoperability among technology firms.

On the same day of the I/O keynote and kickoff, Google sent Microsoft a cease and desist letter, stating that its rival was stripping ads in its recently released YouTube application for Windows Phone. It was technology high drama, but was hardly the first time that the two firms have been at each other.

What follows is a short history of Google and Microsoft’s public squabbles, just in the year 2013 to date. If we were to allow for a longer time frame, this post would become interminable. We begin in January, on the Windows Phone platform.

It started with complaints. Users of Windows Phone 8 devices complained that, apparently all at once, they could not access Google Maps on the browser of their handset. This triggered one of the more silly, and ping-pong-esque press cycles of recent memory in technology.

Early statements from background sources indicated that Windows Phone 8 devices had never supported Google Maps in the browser. Readers, and others, called bull on the idea. One trenchant comment:

Google is flat-out lying. They’ve modified their code to break Google Maps on Windows Phones. It worked before, but with the ‘redirect,’ it no longer works.

The addition of a redirect from Google Maps to the Google homepage on Windows Phone 8 devices appeared to be a move borne from competition; Google didn’t want Windows Phone to succeed, and was thus curtailing support for the platform.

Google released a statement that did little to quell the controversy, as it said little and meant less:

That didn’t help as the browser in Windows Phone 8 shares much of its guts with the desktop-version of Internet Explorer 10, which handles Google’s mapping technology just fine. You could, at one point, on a Windows Phone 8 device, load Google Maps in desktop mode, and by navigating to the .co.uk version of the product, render it on your device sans issue.

Things quieted down when Google promised to lift the redirect that had been erected, stating that it was a product decision, and nothing more.

Still, the lack of Google support for Windows Phone remains a sore issue for the two companies. The platform is a common flashpoint, as you will see. This episode was prelude to future fights. But keep in mind the following: Google and Microsoft compete on everything from music sales to operating systems to government software; this isn’t skirmish, it’s war.

Roughly a week after the Maps kerfuffle, fresh ground was broken between the two firms, this time over the issue of YouTube support on Windows Phone; it is, of course, consistent compliment that Microsoft fights Google for access to its services for its users.

Microsoft had complained in a statement to the FTC that Google had blocked it from supporting YouTube in strong fashion:

We are also disappointed that the FTC chose not to seek relief on other issues. Google continues to prevent Microsoft from offering a high-quality YouTube app for the Windows Phone.

Users of Windows Phone handsets that had their settings aligned in a specific fashion had their ability to watch clips on the video service curtailed. It wasn’t that widespread a problem, but given the tension extant from the week prior, it raised eyebrows.

In mid December, Google announced that it intended to drop support for Exchange Active Sync (EAS) at the end of January. As Tom Warren of The Verge noted, EAS is a “protocol used to sync Gmail calendar, contacts, and mail items on mobile devices.” Cut that off, and unless platforms were up to date with Google’s CardDAV and CalDAV syncing systems, or the lights would go out for much of Google’s web services on that platform.

Or, as TNW’s Emil Protalinski put it:

In late January, Microsoft let it become known that it intended to support both CardDAV and CalDAV.

Why does this matter? It is another example of turf war between Microsoft; much of the case was litigated in the press. The reaction among Windows Phone users if Google had not extended EAS support long enough for Microsoft to adopt to its standards, would have been chaos.

As a background irritation throughout all of this, Microsoft has been pressing forward with its hackish ‘Scroogled’ campaign, which is trying to drum up consumer fear of Google’s practices regarding their data.

It’s a bit ham handed, but Microsoft is dedicated. The company is trying to make noise, and it is partially working. Google, presumably, finds the attacks ridiculous, bordering on the egregious.

In March, through an application update, Windows 8 moved to IMAP support. As TNW reported at the time, this caused frustration:

Microsoft switched to IMAP support earlier than was perhaps utterly necessary, given Google’s unpredictability when it came to its decisions to end products, and support for certain protocols.

This isn’t a new issue, but merely a continuance of a larger narrative. By ending Exchange Active Sync support, Google is putting its Gmail serviceinto some doubt on Windows Phone devices as well. However, Google and Microsoft managed to patch together an agreement by which Google wouldn’t switch of that key conduit until Microsoft builds support for its CalDAV and CardDAV protocols.

This is an incredibly frustrating problem for those using Google services on Windows 8-based devices. Microsoft would likely argue that we should switch over to its cloud-service offerings. But while Gmail and the rest of the Google web apps that we depend on daily for communication lack utter support in Windows 8, the operating system will suffer from the added friction.

Microsoft’s statement was weak: “In light of Google’s decision to change its support for EAS, we are now using IMAP for those customers that wish to connect their Gmail accounts.” Well, thanks. But given that IMAP is not a fully featured EAS replacement, it was not much of a gift.

As ZDNet’s Mary Jo Foley noted at the time, “A spokesperson confirmed that Calendar won’t update with Google information, even for existing connections, once a user moves to the updated Windows 8/Windows RT Calendar app. IMAP is an email-only protocol, so I guess this shouldn’t be too surprising. But I don’t think the Softies made this plan as clear as they perhaps should have back in January.” Foley was correct.

In short, here again we have the two companies competing, if by proxy, to the detriment of users. In this case, Microsoft’s users, which, naturally, are also often Google’s users.

Microsoft released a fully-featured YouTube application for Windows Phone 8 for Windows Phone on the 7th of May. After years of sporting little more than an app that was in effect the mobile browser version of the service, it was a welcome addition to the Windows Phone library.

The problem with the app was that Google hadn’t authorized it, and didn’t like it one bit.  As The Verge reported, “Google’s complaint centers on the lack of ads in Microsoft’s YouTube app, something it claims is a direct violation of the terms and conditions of the company’s YouTube API.The Verge has learned that Microsoft created the app without Google’s consent with features that specifically prevent ads from playing. The lack of ads clearly hits Google’s own revenues, but also those of its third-party content.”

The oddity of this situation is that Microsoft is the upstart peeving the giant, and Google the oldish figure shouting about its lawn. Microsoft bit back saying that it would be “be more than happy to include advertising but need Google to provide us access to the necessary APIs.”

The insinuation here is that Google refuses to provide Microsoft with the proper tools to build an application that conforms with its rules, and is a quality app.

Google did not intend to take the YouTube app sitting down, and sent Microsoft a cease and desist letter. You can read the full copy here. The key part:

We recently became aware of a Microsoft-­authored YouTube application for Windows Phone 8 available at http://www.windowsphone.com/en­us/store/app/youtube/dcbb1ac6­a89a­df11­a490­00237de2db9e. It appears that the application: (1) allows users to download videos from YouTube; (2) prevents the display of advertisements in YouTube video playbacks; and (3) plays videos that our partners have restricted from playback on certain platforms (e.g., mobile devices with limited feature sets). These features directly harm our content creators and clearly violate our Terms of Service. We request that you immediately withdraw this application from the Windows Phone Store and disable existing downloads of the application by Wednesday, May 22, 2013.

That essentially states the case. The timing, however, of the release, was slightly ironic.

Google’s CEO gave an excellent speech at the end of the I/O keynote, before taking questions from the audience. Speaking about his personal history, philosophy on technology, and Google itself, his remarks included commentary on Microsoft:

We’ve kind of had an offer forever that we’ll interoperate on instant messaging. Just this week, Microsoft took advantage of that by interoperating with us but not doing the reverse. Which is really sad, right? That’s not the way to make progress. You need to have interoperation, not just people milking off one company for their own benefit.

What is the interoperating that Page is referring to? Microsoft integrated Google Talk into the Outlook.com product. I wanted to check in with Microsoft regarding Page’s somewhat ambiguous about it “not doing the reverse.” I specifically asked about Skype, which has a chatting service that felt most similar to Google Talk. I was informed that it has a public API for integration.

Google’s response has been a net positive for Microsoft. It has been backed into a corner, frankly, given that it either helps or allows Microsoft create a YouTube app that meets its requirements, or it will be directly harming the use of its own product on a growing – albeit still small – platform. Also, it will appear petty, and hypocritical given Page’s comments.

Microsoft wants a solid YouTube app for Windows Phone. It will now likely get one, and have scored points along the way. Frank Shaw, current head of corporate communications at Microsoft, in his usual punchy language, embodies Microsoft’s current view of the situation: “It’s ironic that Larry is lending his voice to the discussion of interoperability considering his company’s decision [….] to  file a cease and desist order to remove the YouTube app from Windows Phone, let alone the recent decision to make it more difficult for our customers to connect their Gmail accounts to their Windows experience.”

The problem that Google and Microsoft face is that while they remain gripped in competition with each other, their userbases are so intertwined as to be nearly the same; Chrome’s market growth came in large part on the Windows platform, and a huge number of Windows users have Android smartphones. The list goes on.

Thus while they want desperately to beat the other, they can’t do so in a way that harms their own users. It’s not a simple dance.

Read next: Facebook's stock has lost 31% of its value since it went public one year ago