Apps will make you fantastically wealthy. Everyone knows that. Build an app, launch it, and watch the millions of dollars in sales, the press coverage, the buyout deals and the rest of it all roll into your life like a cresting wave.

Photography apps are an interesting category that is worth highlighting in this context, given that certain photo apps have had massively high-profile exits. And also, there are myriad never-rans and not-alikes that have failed, fading into the sunset of No One Cared.

There are a number of successes of varying magnitude that we could highlight, but instead we are going to simply examine two: a major acquisition, and a successful business built around a photography app – Instagram and Camera+. 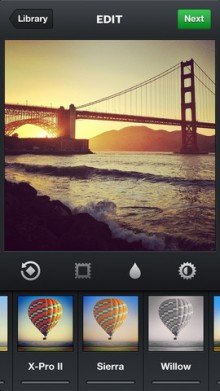 Instagram may not have sold in the end for $1 billion – the final tally was just over $700 million, once declines in Facebook’s stock were calculated – but the purchase of the photography app and lightweight social network was a tectonic event, as it at once proved that not only could an app scare a giant, but that a mobile app could put an Internet giant ill-at-ease.

You’ll note that I didn’t say that a photography application made Facebook scared. It didn’t, really. Facebook wasn’t afraid of Instagram’s photo-focused tools, but more that the best mobile social network was rising so fast that it threatened to tip the network balance of power that it had worked so hard to control.

To underscore how unworried Facebook was of the photo-focused elements of Instagram, all you have to do is ask yourself to count the feature innovation that it has lavished on its expensive toy. Precisely.

In short, the most celebrated photography application will be remembered to two things, only half of which deal with photography: Facebook’s purchase, and filters. The filter strategy wasn’t even new, making the example all the more fun.

What you need to take from this is that Instagram used photos and photo technology to build something else, and not the other way around. The way it harnessed being iOS-exclusive for a long time, and other strategic moves, were as instrumental to its success as were its quirky photo tools.

Our moral here is that photography-focused applications can indeed be fast growing, and wealth-building. However, the actual process of taking the picture may not be the moment of value creation. 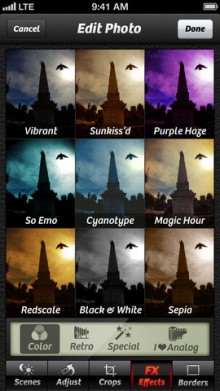 And small download numbers to boot. At the end of January, 2013, Camera+ crossed the 10 million sale mark. The application can often be purchased for $0.99, and sometimes for slightly more. It also has some in-app features for sale, but its blog posts note that sales of such content remains very much secondary to the normal income derived from selling new copies of the application.

“[I]n-app purchases of the “I ♥ Analog” effects pack only account for about 5% of Camera+ total sales, but this still adds up to over 340,000 sales to date, which on its own, would make for a highly successful standalone app.”

When Camera+ reached the 6 million sale mark, it had earned its creators just over $5.1 million. You can run the ratio from 6 to 10 million sales to guess the derived revenue at its most recent sales milestone.

Camera+ has earned less than $10 million for its founders, provided that we are calculating properly. This from an application that has managed to sell eight-figures worth of its product.

Could Camera+ have raised money or taken a big buy-out? Yes, at least according to its own blog:

“In addition, we were very close to closing our first round of funding recently. We ultimately didn’t like the direction the investors were trying to push us in so we decided to not do it. I’ve said it before and I’ll say it again… fuck the VCs! […]

The proposed Facebook acquisition of Instagram fueled a lot of ridiculousness in the industry and the the number of zeroes that’ve come-up in these negotiations has been insane. These offers have been tempting… extremely tempting in some particular cases. “

You have to wonder what the plan was: start by giving Camera+ away for free, and then move to a purely in-app sales model to derive revenue to better monetize the application? It’s hard to see what the relatively low-revenue Camera+ had that investors truly wanted.

Its userbase could be very tempting to a rival for sure, but there are only so many companies out there who would pay through the nose for a mere 10 million users.

The lesson here is that if you do intend on charging for your application, be it photography or any other category, there is a limit to what you can do; Camera+ never scared Facebook because it did not scale like Instagram.

The two products were so different as to make the comparison almost laughable. But among photo-focused applications the differences here are connected by the theme of taking pictures.

Instagram grew with abandon, whilst Camera+ carefully built its feature set, took in sales, and expanded to new platforms. And Instagram took in the big dollars. This highlights our earlier point concerning the nature of the app market: even a big success can leave an app’s creators working away for a payout that might not come.

Camera+ and Instagram are the high-flying standouts. Let’s look at the other side of things, the apps that aren’t going to make it.

To make this point in a more fun way, better than browsing the iOS store looking for also-rans, let’s peek into the relatively nascent Windows Store on Windows 8. A quick search of the marketplace for apps matching ‘photography’ yields 127 different applications. Most are free. Many do not have a single rating.

That’s not the lot of them, naturally, as the ‘top paid’ section of the Photo category alone has 90 applications in it. Windows 8 is new, and already has a glut of apps each vying for your photo dollar.

In short, even on Windows 8, an only partially mobile-platform, there are a huge number of doomed photography applications. I mention the mobile point as photography apps are generally much more useful when you can take them outside; your desktop isn’t very mobile.

Here are some highlights from the Windows Store: Lightroom 4 – Wedding Photography (no reviews), Black & White Photography (three stars based on 9 ratings), and MyLightBox (no reviews). Will some photography-focused applications make money on Windows 8? Yes, but it’s important to keep the lessons of scale and income that we learned before in mind.

We are not here to discourage, but instead to place photography apps into context of the larger app world. Hits are rare. Apps that are ignored are the norm. And unless you can charge a fat figure per sale of your application, you are likely not going to generate a large revenue stream. Building something to flip it, a time-honored tradition, remains a possibility.

Photography apps, just like other apps, are a feast-or-famine proposition.

That in mind, if you are the lottery playing type, start coding but ensure that your unique spin on the niche isn’t derivative, or people won’t look at you twice.

And once you have built something awesome, well, tell TNW all about it.

Read next: Twitter CEO to the University of Michigan's graduating class: Be bold, courageous, and in this moment