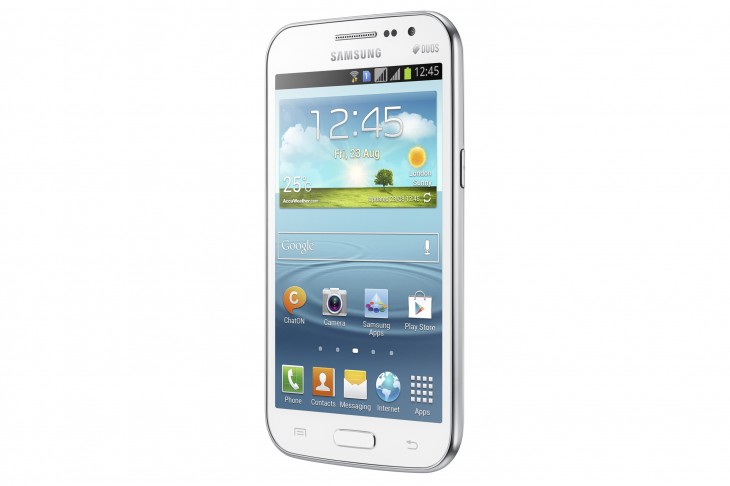 While it looks similar to the Samsung Galaxy SIII, the Win is most certainly a mid-range device, sporting a WVGA touchscreen, 5-megapixel rear-facing camera and a Li-ion 2,000 mAH battery.

Its release follows multiple leaks of the device last week, which led to Samsung China confirming its existence.

The handset comes with 8GB of internal memory, although this will differ depending on the market, as well as 1GB of RAM and a microSD slot, which supports cards up to 32GB.

The Samsung Galaxy Win has dual-SIM support and can also shoot video at a respectable 720p (15 frames per second) as well as playback content at the same resolution, albeit bumped up to 30 frames per second.

On the front is an additional VGA camera, although Samsung hasn’t specified the resolution for this yet. In all likelihood, it’ll be pretty underwhelming like most other Android smartphones.

The Samsung Galaxy Win runs Android 4.1 (Jelly Bean), but has the company’s TouchWiz skin slapped over the top with the usual banquet of OEM-specific apps and features, such as ‘Easy Mode’, ‘Smart Alert’ and ‘Motion UX’.

Available in two colors – Ceramic White and Titan Grey – Samsung is describing this as “an intuitive new smartphone designed to balance the needs of the on-the-go user with massive processing power.” We’ll agree that the quad-core processor is respectable, but the specs elsewhere point to a device well below the recently unveiled Samsung Galaxy S4.

There’s no word yet on pricing or availability for the Samsung Galaxy S4, but as soon as we know more, we’ll let you know.

Read next: HTC March revenue up 40% compared to February, still down nearly 50% year-over-year