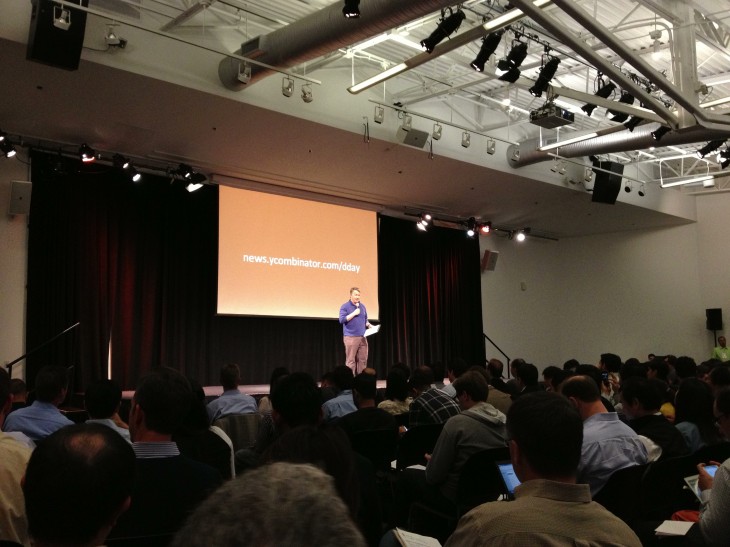 On Tuesday, startup accelerator Y Combinator held its semi-annual Demo Day at the Computer History Museum. Each startup had only a few minutes to present their company, idea, and progress on stage in front of a packed room of investors and members of the media. The Winter 2013 class was much smaller than YC’s last batch and was also notable because it included the first non-profit company the accelerator supported.

Here are six of our favorite startups from Demo Day’s first batch:

This company sets out to help make getting a divorce easier on all parties. Obviously this process isn’t something that should be taken lightly, but what it does is provide families the ability to spare children the anguish of the proceedings. Co-founder Michelle Crosby says that it’s a $30 billion market and that every 13 seconds, someone is getting divorced.

To date, Wevorce says that out of 110 families that have used its service, 109 have kept the proceedings out of court. It is also seeing a 84 percent month over month growth rate. It believes that it can reduce the amount of time a divorce takes (less than 90 days) and cost less than $10,000.

Calling itself the DOS of drones, Airware says that its aim is to be create the default operating system for these unmanned aerial devices. No, it’s not a means to send the machine into combat, but rather to be used by other industries who feel there is a benefit to having these devices, whether it’s to have it do some land surveying, repair something, or the like. While other manufacturers will develop the hardware and the application, it will be Airware that controls what the drone does and where it flies. By 2013, it expects to have 20 customers in 10 countries with $4 million in revenue.

It will be interesting to see how the company can help change the perception some people have when it concerns drones.

Carsharing while you’re traveling? FlightCar aims to make that possible by creating a communal car rental service. Rentees can leave their car at FlightCar’s lot and get a free town car service ride to and from their gate, while also parking for free. The renter will be able to pick which car they want and drive it off the lot.

The service went live 10 weeks ago and FlightCar says that it has booked 450 rentals with more than 220 vehicles listed on its site. It is experiencing a 10 percent week over week growth in revenue — last week it received more than $12,000. The company claims that 75 percent of cars listed on its site also get rented as well.

It’s a difficult name to pronounce, but Microryza seeks to help crowdsource funds to benefit science projects. The company says that the way research gets funded is broken — it seeks to democratize the way research is done instead of waiting on grants and support from the wealthy. In the last five weeks, it has seen its transactions double to more than $15,000.

As the ‘Yelp for contractors’, this service aims to be your one-stop shop for everything relating to remodeling and building of your home. If you need assistance with a home repair project, BuildZoom hopes to connect you with a licensed and reputable contractor. Since joining YC, it says that it has seen 60 percent growth and has more than 20,000 contractors in its database within the San Francisco area. It makes money by charging a 7 percent commission on all projects.

The first non-profit in YC’s history, Watsi took the stage not seeking investments, but rather donations. It’s a Kickstarter for healthcare and medical treatments. Co-founder Chase Adam regaled the audience with a story of a 12 year old girl from Nepal who needed heart surgery and was referred to Watsi. Within days, 24 donors took care of the costs and helped save her life.

Watsi is 100 percent transparent and discloses exactly where the money goes. It does not take any cut of the money donated, but accepts tips. The organization says that it is redefining transparency too by making all of its financials and operations available on its website and even takes screenshots of each fund transfer.

Adam says that its model is working, with average growth of 30 percent week over week. Additionally, it is seeing that there are more donors giving than there are available patients.

This is just the start of YC’s Demo Day. There are dozens more companies waiting to present to investors. Check back for another post on our favorites from the next batch.

Read next: Forecast is a new, gorgeous weather service and API from the team that made Dark Sky