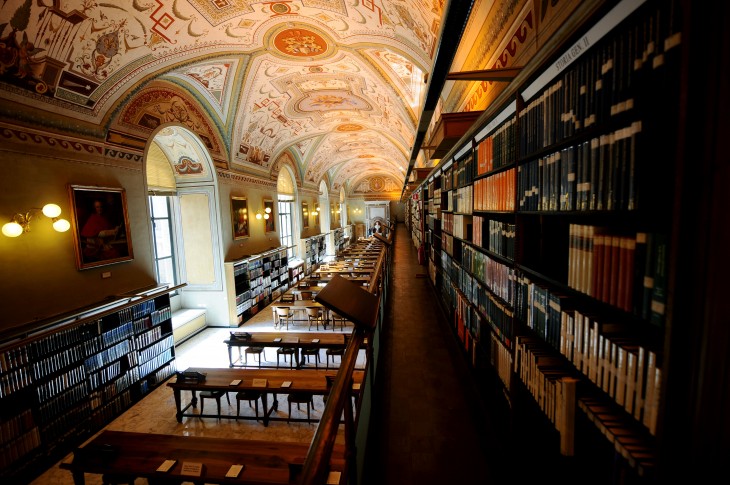 The Vatican Apostolic Library, one of the oldest libraries in the world containing more than 80,000 codices and 1.1 million printed books, is to see the majority of its work digitized thanks to 2.8 petabytes of storage being provided by EMC.

The library, established in 1448 and located in Vatican City, will see its entire catalogue of manuscripts and incunabula (a book or text written before 1501) preserved in an ISO-certifiable digital format.

It’s all part of the library’s goal to preserve some of its most valuable books and documents, which are now prone to deterioration and decay because of repeated handling.

The ongoing digitization project involves a number of organizations and institutional partners including Oxford University’s Bodleian Library, the Polonsky Foundation and the University of Heidelberg. The intention to begin preserving these documents was reported by Reuters last April, but it appears that the actual process is yet to get underway.

Some of the most notable documents to be digitized include the Sifra, one of the oldest extant Hebrew code which was written somewhere between the end of the 9th and the middle of the 10th century, as well as Greek testimonies for the works of Homer, Sophocles, Plato and Hippocrates.

The incunabulum of Pius II’s De Europa, printed by Albrecht Kunne in 1491 and the Code-B, one of the oldest extant manuscripts of the Greek Bible, will also make up some of the 40 million pages being preserved by the Vatican Apostolic Library.

The 2.8 petabytes of storage provided by EMC, however, is only the first part of a nine-year project to try to preserve the library’s most precious works.

EMC’s sponsorship has occurred as part of its ‘Information Heritage Initiative’, which aims to make “historical documents and cultural artifacts readily accessible for research and education via the Internet.”

The company will be working with Dedagroup, its systems integrator partner, for the next three years to store the files using its Isilon scale-out NAS, Atmos object storage, Data Domain and NetWorker backup and recovery solutions, as well as VNX unified storage solutions.

“Where once knowledge and information would have been stored on the page, facilitated by the scriptoria or later the printing press, today EMC serves the same purpose through our storage technologies,” Marco Fanizzi , Country Manager for EMC Italy said.

“The collaboration with the Apostolic Library is an incredibly important project and will provide future generations with access to knowledge and insight that may otherwise have been lost.”

The Vatican appears is making great strides into the digital age. The Pope setup a Twitter account last December under @Pontifex, before sending out his first tweet which read: “Dear friends, I am pleased to get in touch with you through Twitter. Thank you for your generous response. I bless all of you from my heart.”

All of the tweets have since been removed, however, following his resignation earlier this year.