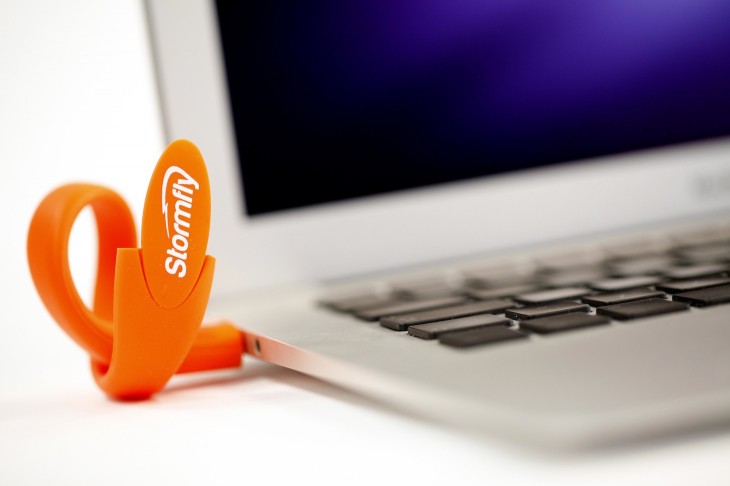 Scrappy Barcelona, Spain-based startup Now Computing has big plans for its wearable USB 3.0 wristband that can be used to boot an entire operating system on almost any Mac or PC, out of the box.

Dubbed StormFly, the company recently launched a Kickstarter campaign hoping to raise $100,000 in crowd-funding to go from prototype to ship-worthy bracelet, and a few hours ago that goal was achieved.

Coincidentally, Now Computing’s offices are quite close to where I temporarily live in Barcelona, so I caught up with founder and CEO Feargal Mac Conuladh in a nearby coffee place this afternoon to talk more about the project. You can find the video interview at the bottom of this post.

Feargal spent over 20 years working for major technology companies, including Apple, Lenovo and Epson, but is now fully in startup mode.

His fledgling company Now Computing’s StormFly, which doubles as an actual USB storage device, comes with a Linux-based OS (bootable in most modern PCs and Macs) embedded in a flashy wristband.

You can stick the USB into any computer and simply reboot the machine to use StormFly, so you can essentially take your entire operating system and critical data and use it on whatever PC or Mac is available.

StormFly also comes with an (optional) backup service so you don’t have to worry too much when it gets lost or stolen. Here’s a demo video:

Now Computing is primarily targeting parents with kids but also realizes the potential usefulness for business travellers, education (both school ands students) and whatnot.

It is decidedly not focusing on techies because they’re a tough crowd – tinkerers and hackers could feasibly develop their own, similar solution if they wanted to, though of course it takes more than building it to turn such a project into an actual business.

The Spanish company needed to raise $100,000 on Kickstarter to bankroll its first manufacturing run, and over 900 people have pledged so far (the campaign ends Sunday noon EST so you can still join the party).

When the device will be ready for shipment – in a few weeks – the StormFly device will cost $59, not including shipping fees.

Enjoy the video interview and let us know what you think.