Earlier this week we published the first part of an interview with author and investor Tim Ferriss, who will be speaking at The Next Web Conference Europe 2013, which takes place on 25 and 26 April.

Here’s the concluding part of the interview, in which Ferriss discusses why he took the controversial approach of publishing his latest book with Amazon Publishing, his startup investment strategy and what the future holds for him.

is published by Amazon Publishing, an unconventional approach. Why did you take that route and how’s it been going? 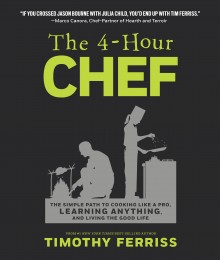 Tim: “It’s the first major book acquired by Amazon Publishing and they actually announced the existence of Amazon Publishing with the acquisition of the book. It’s been a very exciting rollercoaster of a ride to put it very mildly, which has had some incredible pros; meaning I’ve been on the homepage of Amazon, I can look at metrics that I’ve never had access to before – I can look at the top 20 traffic referring URLs to my book product page. That’s cool data. Super cool.

“I can identify all sorts of fascinating aspects of my customers so that I can better serve them and better reach them. Simultaneously, Barnes & Noble has boycotted the book nationwide in the US, as have many independent bookstores.

“It’s been a tumultuous experiment, but one that I would do again. The reason I chose to go with Amazon was because I developed a relationship with them over time because of the volume of sales I was pushing through Amazon for the first two books. When the opportunity came about to work with them, I decided to take it because it’s exciting to be able to be the first to do just about anything, and I was willing to take some risk in doing that.

“Random House, Simon & Schuster, these traditional publishers sell to the head category buyers at a Barnes & Noble or Books-A-Million. They do not know their end users, they have no data about their end users, nor do they have any way to communicate with their end users. Amazon, in many ways I would say, knows me better than I know myself just based on my Amazon Prime purchasing behavior as well as what I refer people to through my blog, which they can track of course.

“That’s fascinating to me. I’m not anti-bookstore, I’m pro-reader. There’s a big difference. My readers, if you look at the percentage of digital sales in my three books, The 4-Hour Work Week began at about 6% digital and it launched more or less simultaneously with, I would say, a user-friendly version of the Kindle.

“So if you were to look at, let’s say, cookbooks as a category where I sold 37,000 or so Kindle copies in the first week, my closest cookbook competitor in print sold probably in the hundreds or less than 2,000 certainly. I feel very comfortable saying that.

“I think if you were to look at my audience as, not exclusively but very much heavily weighted towards, early adopters, I think that’s the future. I think that’s a glimpse into what will be for most books, not too far from now.”

TNW: Aside from your books, you’re heavily involved in the tech scene as an investor in startups. What do you look for when you invest?

Tim: “There are a few criteria that I have and my model is quite simple. Whether it’s Shopify, Uber, Evernote, TaskRabbit, I look number one for a product that I can be a power user for, something that I would pay for even if it’s free in the case of Evernote for instance.

“I look for a service or a product ideally that already has a certain degree of traction. I make exceptions for that with entrepreneurs that I’ve worked with before or founders who have already displayed success.

“In the case of Uber, for instance, I was already an advisor to StumbleUpon and knew Garrett Camp very well and Travis Kalanick who came in as a CEO, I had already invested with in two or three companies. So I was very confident in investing in that team even though it was starting from scratch.

“One social proof point is recommendations from my readers. So I actually connected with both Evernote and Shopify by spotting patterns in my reader feedback on Twitter and Facebook.

“Then lastly, ideally it would be a product that I would feel comfortable pitching to the New York Times as part of a trend piece because that means that it has both the simplicity and the timeliness to scale to a mainstream audience. That’s pretty much it.”

TNW: Are you still looking to invest in more companies or are you just happy with your portfolio as it is?

“I’m going to become a bit more selective by necessity, given time constraints. But I still spend 30 to 40 percent of my time on startups. I will continue to do that for a very long time so I’m not into any rush. I don’t feel like there is a gold rush that I have to cash in on in the next 12 months and, in fact, I think there’s probably going to be a nuclear winter of sorts in the not too distant future and that doesn’t bother me because I will still be into the all the startups when all of the fairweather investors go away.

TNW: Finally, what’s next for you? Is there another ‘4-hour’ book on the way?

“I haven’t decided what’s next just yet besides taking three to four weeks off after this last book push. I’ll probably focus on some type of physical skill like surfing along with a language of some type. I’m thinking about Southeast Asia specifically but to take some time to create negative space so that there’s room for the big ideas.

“I think for 2013, I was reading a book by the two of the people that led the Clinton campaign in 1992 and the presidential campaign which was successful of course; Buck Up, Suck Up . . . and Come Back When You Foul Up.

“One of their concepts, which was borrowed from Newt Gingrich with whom they have nothing politically in common necessarily, but the concept was focusing on antelope instead of field mice. What that means is or the analogy of the story that was used is, as a lion you can keep yourself fed everyday all day by eating field mice. You just have to spend all day eating field mice, 300, 400, 500 field mice or you can reserve your energy and focus on one antelope.

“I think it’s extremely easy in the digital world, certainly involved with start ups or running a startup, to become very reactive where you’re reacting to field mice all day long. So I’m going to take a break to determine what the antelope will be for 2013.

“I’d like to experiment with the visual medium more. I’ve had a lot of fun working on video trailers for the books which have been some of the most successful ever created. I’ve done some experiments for television but teaching through the visual medium is something I think I’ll focus a lot on in 2013.”

Tim Ferriss will be speaking at The Next Web Conference Europe 2013. Tickets are available now.

Read next: Uber officially launches in Singapore after four weeks of testing in its first Asian city