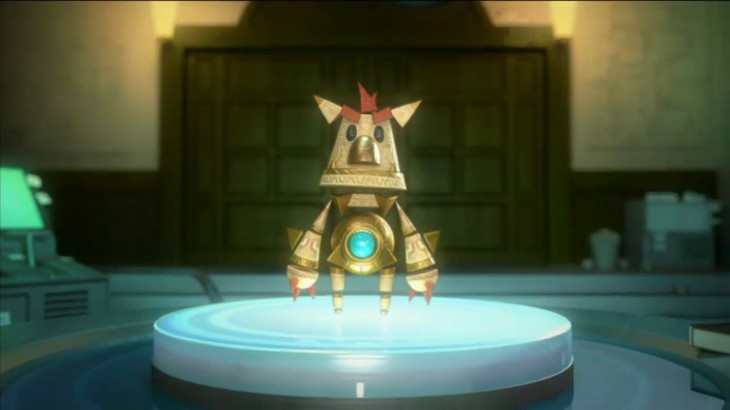 During its PlayStation 4 announcement today, Sony revealed the first title for its upcoming console. Knack is a cute science fantasy action game featuring a character that can quickly change its size.

Sony’s Mark Cerny, the PS4’s hardware lead best known for Marble Madness, showed off a trailer of the game, and said he was one of the people working on it (he’s the director). The character is made up of stone blocks, can apparently grow on command, and is fighting goblins.

As you can see, at one point in the video a goblin says “Knack, you’re no human, why do you work for them?” The implication is that you’ll be using Knack to save the human race from a goblin attack.

The game reportedly fully utilizes the PS4’s processing power, pulling together its graphic capabilities into a story that blurs the line between gameplay and cinematic videos. The trailer shows a very beautiful game, although it’s not yet clear how much mileage you’ll get out of it.

We do know, however, that you’ll be able to stream your gameplay for your friends to see at any time over the web (via the next-generation PlayStation Network), and they will be able to take control of your character from their own PS4 if you get stuck. Knack may be a one-player game, but Sony is still trying to make it as social as possible.

The PS4 will not require booting, and games will be downloaded as you play them; Cerny said Sony will be using the title as practice in cutting down load times. Knack will be one of many games available when the console launches later this year.