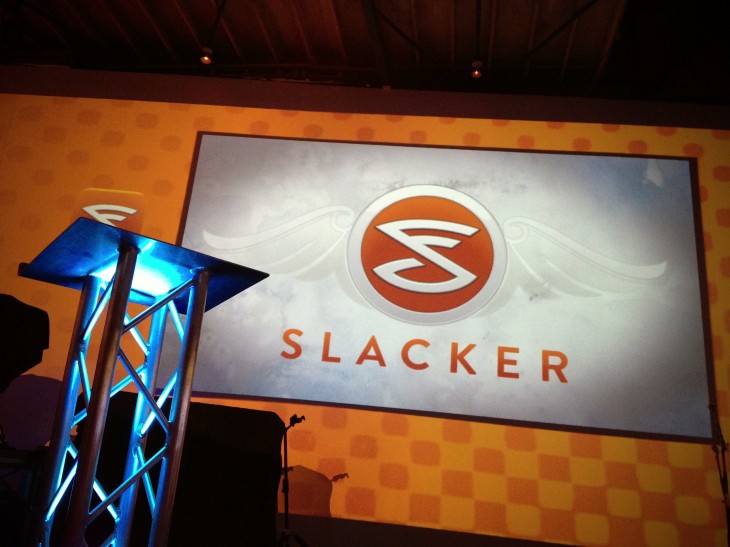 Slacker Radio has decided time is now for it to announce itself to the world. No, you didn’t miss anything — it’s been around for a while, but today, the Internet music streaming service redesigned its digital properties and is now actively promoting itself with an updated brand. It is also taking some shots at Pandora and Spotify, two popular services, along the way.

To mark the launch of this new product phase, Slacker is giving listeners free access to all of the features and benefits from its premium service on February 14 and 15.

Although it launched in 2006, today is the first time Slacker has focused on a concentrated effort to market the company, rather than its offering. Jim Cady, its CEO, says that over the years, it has been quietly building a scalable business that now has more than 500,000 paying subscribers and over 4 million monthly average users. He believes that 2013 will be a “blockbuster” year as it seeks to finally ramp up its marketing initiatives and expand its audience.

Available on iPhones, iPads, Android, Windows Phone, BlackBerry, and other various devices, Slacker says that what makes its business model unique is that it is “gross margin positive for every user”. Cady explains that anyone who uses Slacker, whether they are a paid or a free member will generate a positive value to the company. The company has two ways to make money: advertisements or subscriptions.

Craig Rechenmacher, Slacker’s Chief Marketing Officer, tells us that the reason why the company hasn’t been marketed in the past is because he wanted to make sure Slacker had the right product, content, and scalable business model. Now that all of those items are in alignment, he feels now is right to take on the competition. When it comes to Pandora and Spotify, Rechenmacher says that those services only do one thing well, whether it’s streaming, playing custom content, or anything else,  but in the end, it’s forcing listeners to bounce from service to service, never satisfied.

With Pandora, Slacker states that it has 10 times more music used for live streaming and custom stations. In Spotify’s case, it’s known for on-demand listening, but Slacker says it offers more than 200 special genre stations that can be used for music discovery. In addition, the company has a rather extensive array of customizations, including additional filtering.

At a press conference last night in San Francisco, Cady admitted that Slacker wasn’t going to hold back any punches — it was going directly at its competitors and had no reason to “pussyfoot around”. To that end, Rechenmacher introduced the company’s new commercial and online advertisements aimed at convincing listeners to use its service. In the video spot, Slacker pokes fun at Pandora by saying that it plays the same music repeatedly while Slacker gives users the option of similar songs, but with much less repetition.

In the banner ads, however, this is where Slacker seems to strike directly at Pandora founder Tim Westergren and Spotify founder Daniel Ek in the messaging. Although the full names aren’t mentioned, it’s pretty apparent that the ads are meant to attack both companies — as the San Francisco Chronicle puts it, “the display ad criticizes Spotify for its propensity to post annoying updates to a user’s Facebook account.”

Its online advertising efforts, combined with the TV commercial are all part of Slacker’s $5.5 million media placement campaign and will be run on YouTube, Vevo, College Humor, and other relevant sites.

While it boasts an audience in the millions, Slacker’s numbers pale in comparison to Pandora’s (65 million monthly listeners) and Spotify’s (20 million) and even though it has a larger collection of music and programming, those unfortunately don’t mean anything if you don’t have the audience to help generate revenue for the company.

In addition, Slacker is only available in the US and Canada, but when you compare that against Spotify’s 26 countries, it’s a rather small number. Only Pandora is available in less countries, but when you consider the entire picture, it’s a wonder how Slacker could compete against the two services. Let’s not forget that there are more Internet music streaming services that are also fighting for supremacy, including Rdio and Rhapsody. The marketplace has definitely gotten crowded so it will be interesting to see how Slacker can stand out.

After all, Slacker is practically everywhere — it’s just that no one knows what it is, let alone that it exists. Already it comes practically pre-installed on every Android phone sold through Verizon, Sprint, T-Mobile, AT&T and US Cellular, and can also be downloaded from the major mobile app stores. Additionally, over the past 18 months, the company has been moving into the automotive industry, establishing partnerships with GM, Ford, Chrysler (it integrated with Uconnect Access during CES last month), Honda, Acura, and others.

Perhaps it’s also Slacker’s partnerships with non-music outlets that may distinguish it from others. The company says that it has deals with ABC News, ESPN, the Weather Channel, and American Public Media to broadcast through its service. Through these license arrangements and the revenue gained from Slacker’s three tiers of service, it says that it has a scaleable and sustainable business.

Slacker has raised $68.1 million since 2007. This is more than Pandora’s $56.3 million before it went public, but significantly less than Spotify’s $188 million.

Read next: Amazon brings its Cloud Player to cars via Ford's SYNC AppLink