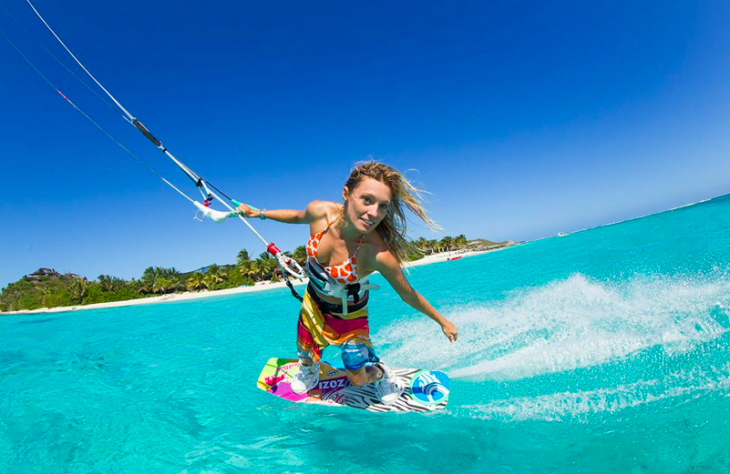 A group of twenty Silicon Valley investors, entrepreneurs and professional kiteboarders were invited by Sir Richard Branson to spend the first week of January on his private island in the Caribbean: Necker Island.

Hosted by Austrian entrepreneur Constantin Bisanz, this was the most exclusive of all MaiTai events to date and Bisanz handpicked “successful entrepreneurs, who also like to have a good time” from all over the world to attend the activity-packed week on Necker.

Founded by professional kitesurfer Susi Mai and venture capitalist Bill Tai, MaiTai has garnered much press for attracting Silicon Valley entrepreneurs, with Forbes estimating the net worth of individuals on the last trip in Hawaii at $7 billion in market value. These entrepreneurs also have an affinity for kiteboarding and being a part of the MaiTai group means being able to learn from the world’s best boarders like Necker attendees Andre Phillip – voted number one rider in the world by kiteboarder magazine, three years in a row – and Gretta Kruesi, who holds the US kiteboarding distance record at 100 miles.

The female half of MaiTai, Susi Mai is one of the biggest names in kiteboarding and brings an all-star line up of pro kiters to every event, she is also a champion of female empowerment though teaching women to kite.

The week was jam-packed with activities on Necker including morning tennis tournaments with Richard Branson, kite races to Anagada and yacht racing. Branson also posed technological challenges to the group, like how to solve the problem of connectivity of kiters at sea when no telecom coverage was available. Branson, who has been a keen kiteboarder for years, spent much time on the water with the group.

MaiTai was born seven years ago out of a conversation between Susi and Bill at the Hawaiian condo of Silicon Valley veteran Ken Goldman, currently CFO of Yahoo. It now attracts entrepreneurs from as far afield as Berlin and San Francisco, including long-time MaiTai friend Bisanz who sold his company to eBay for $200 million and has now started Aloha – a wellness and lifestyle brand.

Kiteboarding is a relatively new sport but has already been dubbed ‘the golf for geeks’, as many Silicon Valley professionals have taken up the spot. Google founders Larry Page and Sergey Brin are enthusiasts of kiting and also happen to have recently bought the island adjacent to Branson’s to take advantage of the great water conditions.

MaiTai co-founder and partner at Charles River Ventures, Bill Tai says there are similarities in personality traits between someone who starts a company and someone who kiteboards. “In kiteboarding, you fail and fail often. There are thousands of variables which are desirable to achieve, that you don’t understand until you’re into it, but you live for the one moment where it all comes together and you’re flying through the air and land properly, that makes it all worth it,” said Tai.

At a time when there are a plethora of generic networking events, networking itself has become stale. Groups like MaiTai, ICE and Summit Series offer an alternative environment for conversations and relationships to be built around different activities. Instead of ‘what do you do?’ the conversation revolves around the activity you are doing.

New kiters in the Necker group, Dave Gilboa and Brandon Simins started off with lessons on how to fly the kite and by the end of the trip were in the water with the board. The chance to make significant progress in kiting creates confidence, but it’s also a very humbling sport; no matter how good you get there will always be someone better (and worse) than you.

The MaiTai brand is growing significantly, with over 1,500 entrepreneurs wanting to attend the flagship event in Hawaii last year. Now Susi and Bill have launched MaiTai Global – a series of world-wide events around entrepreneurship and kiteboarding.

MaiTai is set up as a non-profit to build a global community and help foster relationships between entrepreneurs and athletes globally who gather to push the limits of life, business and sports.

This year MaiTai will hold events in Brazil, Dominican Republic, Hood River, Utah, Maui, Perth. Over 20 startups have launched at MaiTai in the past two years and several companies have secured startup funding from fellow attendees on MaiTai, including hit mobile services like Tango and Voxer which were in the top 30 most downloaded in the apple store in 2012.

Participation in MaiTai is limited and by invitation only. To get involved please email [email protected].

You can find more information on the website listing all events.

Susi and Bill on stage at Le Web

Read next: Google completes deal to move its London HQ over to Kings Cross Central