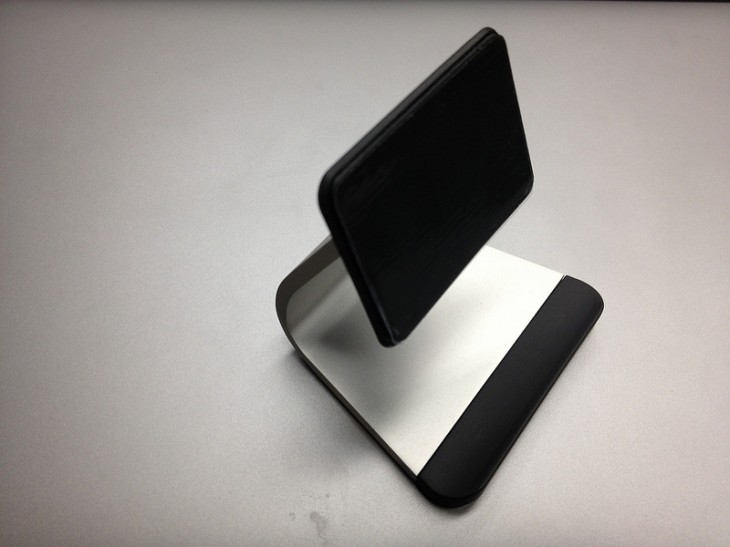 There’s certainly no shortage of accessory vendors at CES, but there’s a definite shortage of truly high-quality products that work well with what you already have. For fans of Apple’s design sense, there’s probably no single company that does a better job at matching the aesthetic than Bluelounge. The company has a few updates to existing products, but there’s a load of new stuff that you should see as well.

To start, the company’s line of 100% recycled bags are now available in a rust color. This is in addition to the previous line which was all black, so it’s just icing on an already tasty cake. There’s also a Euro-styled postal bag, a demo unit of which I received today, that we’ll be reviewing in the near future.

The next update comes to the company’s already-famous Milo gadget stand. I spoke to Bluelounge’s Creative Director Dominic Symons and he explained why the company had never done the stand in aluminum. Symons told me that his standards were difficult to meet, so it took the company quite some time to find a distributor for aluminum that would meet his expectations. But now that the distributor is on board, the Milo gets an update.

The Milo is one of my personal favorite Bluelounge accessories. Designed to hold any phone with a smooth back, it uses what the company calls “micro-suction” to allow you to quickly place your phone at a comfortable viewing angle, and then remove it without having any sticky residue. The same material is on the bottom of the Milo, keeping it steady on your desk. It’s a mere $15 in plastic, and $29 in aluminum.

Other updates include Lightning connectors for the company’s MiniDock, and there’s a revamp coming to the multiple-device charger that Bluelounge calls The Sanctuary, but we don’t have full details just yet.

There are some other updates from the company in the pipeline, and we’ll tell you about them as soon as we can. I will provide you with a bit of a teaser though — one of Bluelounge’s most popular products is getting a revamp and I’ve been promised that it’s better than ever before.

I have to admit that I was slightly disappointed to see that there wasn’t an update to the company’s amazing StudioDesk. Though in fairness, there’s positively nothing about the desk that I’d want changed. It’s still the most perfect piece of office furniture I’ve ever used. So, that minor moment of sadness aside, it was time to look at what’s actually new.

The first thing that I noticed was the CableBin. It follows the same idea as the company’s CableBox, providing a slick-looking hiding spot for cables, but the CableBin is larger and cylindrical, with a slit down the entire side and a lid to keep everything in its place. It’s a welcome addition to an already-stellar lineup of cable management accessories.

The next item is the Saidoka (side-oh-kay). If you’re like me, most of the iPhone docks on the market don’t really appeal to you. They tend to be awkward, with only a couple of notable exceptions. But the Saidoka is a different animal. Your phone lays in it, and it’s meant to sit on your desk close to your keyboard. It holds your phone at roughtly the same angle as your keyboard, so that you can comfortably look down, answer texts or listen to a voicemail. Audio ports and an included power cable round out the package. Bluelounge had both 30-pin and Lightning port versions on display, and we should see them on the company’s site soon for $30.

Next up is something that I love so much that it just feels crazy. It’s called the Kii. It’s a 30-pin or Lightning to USB adapter, with a locking cap, that’s roughly the size of…well…a key.

While there’s no word yet on that cool, magnetic key keeper coming to market, the Kii is going to be available quite soon for a mere $20. Symons tells me that Apple’s Lightning announcement took the company by a bit of surprise, so Bluelounge has been sitting on a full stock of the 30-pin version for a few months. But when you’re dealing with Apple fans, you want to cater to the newest as well as legacy items so the Lightning edition will be in our hands quickly.

The final new piece from Bluelounge is called the Mika. It’s a tablet stand, akin to the Milo, but without the “micro-suction” area. But it’s not just limited to tablets. You can actually use the Mika with a MacBook Air, or the Retina MacBook Pro, lifting the display to a more comfortable height on your desk. It’s $40, and again, coming very soon.

While CES might be billed as the place to find what’s up and coming, it’s great to see some of our favorite brands innovating, creating and coming up with the next generation of accessories for our enjoyment. If you’ve not given Bluelounge stuff a try yet, please do. If you’re a fan of incredible design, sturdy accessories and killer innovation, Bluelounge is not to be missed.

Read next: After signing 'definitive agreement' with Sprint, Clearwire receives $2.4b acquisition offer from DISH