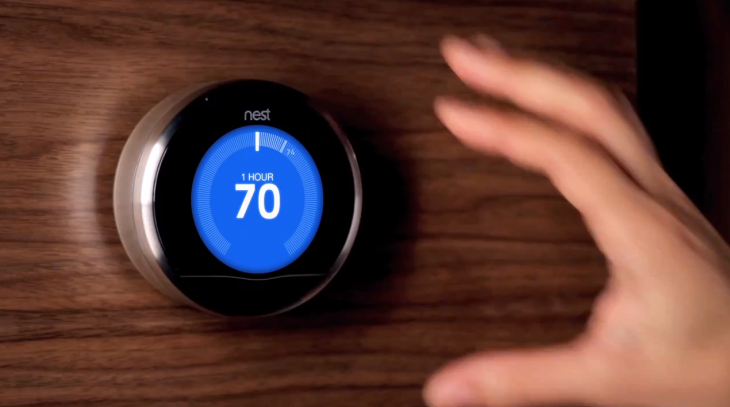 After arriving at 600 Best Buy retail locations in the US, Nest’s intelligent thermostat is launching in stores across Canada, including Lowe’s, Home Depot and Amazon.

Nest’s unusually attractive design has led it to make quite an impression in the US. The device learns your schedule, programs itself and can be controlled by your phone — plus the company claims it can lower your heating and cooling bills by up to 20%.

Nest first offered its thermostats in Canada six months ago through its online store, but now the company is in the middle of a full-scale rollout, which will likely lead to a strong uptick in sales from this region. Nest was quick to note on its blog that its device works in Celsius, and can be set by half degrees…and can speak Canadian French. Back in May, Nest jokingly suggested that Nest appeals to Canadians because it “is reminiscent of a hockey puck.”

At Lowe’s and Home Depot, only the new and thiner Nest 2 is available for $249, while Amazon is selling both iterations of the device (1st gen is $199) while supplies last.

While speaking at the Greenbuild Expo last month, CEO Tony Fadell discussed Nest’s plans for expansion: “Our job right now is building the market, informing the market,” said Fadell in response to a question about whether Nest was going public any time soon. “We didn’t make any money on the iPod for years,” he said, adding that their job was to bring it to the world right now. Fadell also shared that Nest’s target market is quite wide, noting that the “demographic is from 20-70 year olds.”

If you’re interest is piqued, nab a Nest via the links below.