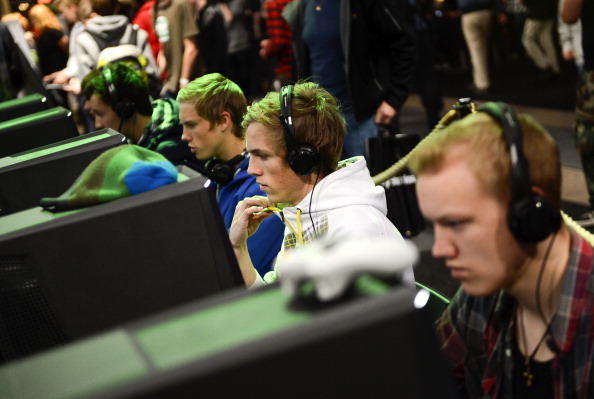 The company was co-founded by Charles Huang, one of the creators of the popular “Guitar Hero” game franchise and is joined by Matt Crowley, former Palm and Nokia product lead, and Karl Townsend, lead engineer for the Palm Pilot. With this new source of capital, the company hopes to build more games that will work on its system.

The change in how gaming is done

What Huang and his team are building is something interesting — it hopes to create a new game paradigm, something that isn’t relying on the needs of traditional consoles like the Microsoft Xbox, Sony Playstation, or even the Nintendo Wii. Instead, gamers will use something that is much smaller, but familiar: your mobile device.

Mobile gaming isn’t anything new, but Green Throttle Games hopes its twist to it will make it more appealing. If this works, gamers will be able to play multiplayer games right from their phones and tablets on the television against people in the same room. While there are multiplayer games out in the market, it still isn’t like how one might play Call of Duty or Halo 4 on a game console. Huang says that his team “believes a large percentage of consumers will use their phones or tablets to play games on a TV, and mobile-to-TV gaming could quickly grow to surpass the console market.”

After leaving “Guitar Hero” in 2010, Huang explored where the gaming industry was heading. He hoped to find the next $1 billion industry — of which a majority is from games on CDs and consoles. Soon he realized that the business model for console games was broken and felt it wasn’t sustainable.

Huang looked at how best to deliver games to consumers and saw that the mobile device was becoming a source of powerful technology — it already had the power of a CPU and a distribution network that was “unparalleled” compared to other gaming devices.

Microsoft, Sony, and Nintendo have already begun moving in this direction with Sony making Playstation games on the Android platform while Wii has created a tablet-like controller, and the Xbox has been tying things together with its Xbox Live service available on the smartphone. But Huang says that these companies are building things for their proprietary networks — Green Throttle Games is looking to build on the backs of existing distributions that Apple, HTC, Samsung, and others are already doing.

With this new gaming paradigm, Green Throttle Games hopes to find a way to streamline the way people interact with the game. It says that by having an open platform, users will be able to play one game on a specific device and continue it on other ones easily because of the integrated platforms. If this works, it looks like gamers won’t need to stick with one game system to play their favorite games, which could wind up saving people a lot of money.

To help with the gameplay, the company has created a specialized Atlas wireless controller that will cost about the same as an individual Playstation and Xbox one. Up to four players can connect to the same Android device powering the game.

The difficult level lies ahead

Now that Green Throttle Games has funding, its greatest challenge lies ahead. Not only does it need to worry about contenders like OUYA and similar services, but the lack of games is somewhat disturbing. Huang says that the company’s goal is to get 20 new games launched by the first quarter in 2013 and it’s working on getting the Atlas controllers in the hands of developers to help them get a head start in programming games.

To aid developers, the company will be releasing its SDK on December 12 so that they can easily integrate their games with the platform.

Developing games for the television screen, especially something that’s on a large display isn’t simple. As you might expect, it’s similar to what you get when you try to use an iPhone-only app on an iPad — it doesn’t scale up correctly and looks pixelated. By having this on a television, it will get much worse because it’s a screen where people spend an enormously long amount of time staring at it consuming content.

Not trying to create a marketplace of games

While Green Throttle Games is looking to have third-party developers create games for this new platform, it’s not focused on building out a marketplace. Huang tells us that when gamers play one of its games, it may recommend other similar titles. This is done intentionally to aid in the discovery of new games to foster the ecosystem’s growth.

Right now, money is made from the sale of the Atlas controllers, which are available for pre-sale at $49.99 each. Additionally, it will receive revenue from games that are bought right from the Google Play and/or Amazon marketplace for the games that it created — it doesn’t have a revenue-share plan in place.

Investments from firms that know gaming

With the seed funding from Trinity Ventures and DCM, Green Throttle Games has the backing of two investors who have backed other industry startups, including KIXEYE, Papaya Mobile, and others. Huang says that both firms are experienced in the industry who “understand what gaming marketing is all about.”

Ajay Chopra, the general partner at Trinity Ventures and the newest board member to the company, said “the ability to play mobile games on a big screen TV is very attractive, and Green Throttle’s leadership is well poised to bring in the kind of top quality games and industry connections that are needed to turn the Atlas controller and Green Throttle’s solution into a household name.”

Jason Krikorian, general partner at DCM, believes that “in the next 24 months, the smartphone will reach beyond the few inches of its own display to massively disrupt and cross over to previously independent platforms.”

As it stands, right now all Green Throttle games are available on Android devices. The company feels that it’s more open and easier to get things working. In addition, with an enormous distribution in Kindles, smartphones, tablets, etc, it made sense. An iOS version is said to be released in the first half of 2013.

Read next: Evernote Business launches in seven countries to bring collection, discovery and sharing to teams