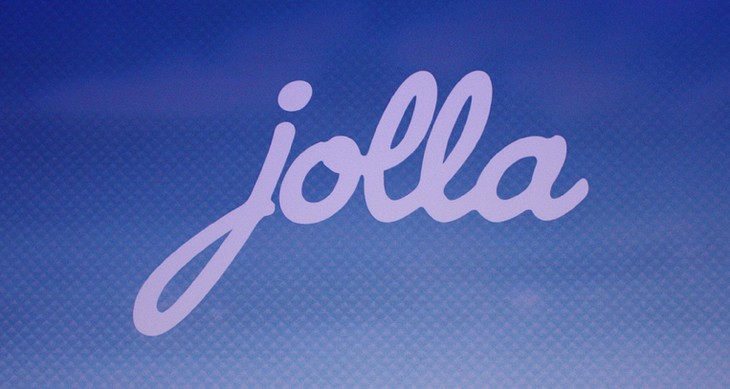 Unless you’ve been AWOL from tech in the past few days, you will have noticed that Jolla, the Finland-based designer and developer of smartphones and mobile operating systems, launched a volley of news at the Slush conference.

Frankly the company’s presentation at the event was a perfect pitch. News, charisma and a theme that everyone should work together in an open and transparent manner is exactly what an audience like the one at Slush likes to hear. So it’s no wonder that Jolla and its activities were  practically a theme for the conference.

Earlier that morning news had been released that the company had signed its first carrier deal for the Sailfish OS it was revealing at the event. So there was already a buzz and curiosity before the presentations even started.

Jolla’s recently appointed CEO, Marc Dillon told The Next Web, “We brought the whole company on stage. This was the first time  for everyone in Jolla to get to tell their own story. The OS and experience was created by all of us.”

Shared responsibility is deeply ingrained in Jolla, it’s a structure that turned up in conversation a lot at Slush. The movement toward companies shrugging off old corporate hierarchies seems to work well when it comes to creating a positive culture.

“We’re completely equal in the company,” explained Dillon. “The salary structure is flat. Every engineer has the same salary as I do at the moment as does every designer and everyone in R&D.  We look for people who have incredible talent and a shared vision.”

This certainly makes sense at a startup level, but Jolla already has a large team and is still growing. The flat structure might sound like a ‘nice’ thing to do but there is a strategy in this method and it’s related to the type of work the company produces.

“Companies go agile but they keep all of the management overhead,” explained Dillon. “So we built this as an agile organisation from the ground up. We do have steering in the company, sometimes you do need to make sure you have the right things in the product and you do have to cut some things. But it’s mostly about engineers creating their own requirements, being involved in the entire process, end to end.”

According to Dillon, this attitude is a good way to encourage staff and produce better work, “How do you get the most from someone? You make sure their heart is in it,” he says. “People come in the door with extraordinary talent and they already know what to do, they start carving  pieces of work for themselves. We also allow change so people can rotate, they can try lots of different things once they come into the company. No one is telling them – your job description is to do this.” It’s an appealing prospect to anyone who has been treated like a ‘code monkey’ in a large firm.

Jolla’s general friendly attitude went a long way with the startup crowd. The feeling that everyone is in this together is a supportive message. The fact that the company presents itself in a relaxed and casual manner also has currency in a world where big corporate suits look like different species.

Preaching to the choir

Throughout the conference, different members of the Jolla team presented various aspects of the new release. This showed sense of support and trust. Rather than listening to a manager present the work of others, designers and engineers were able to show off their own work.

Again through these presentations,working together and yet having character were strong themes.

When one of the co-founders, Sami Pienimäki took to the stage, his opening comments were met with approval, “I freed myself from a corporate environment about a year ago” he said. “I started to be a passionate, even a stubborn entrepreneur.” It was instantly recognisable, almost a mantra for the other attendees.

Moving from preaching to the converted, Pienimäki highlighted the company’s success in nailing down a deal with D.Phone, one of China’s largest retailers of mobile phones and accessories. D.Phone is a member of the Sailfish Alliance. Not a fleet in Star Wars but a collective that works to develop the Sailfish OS and place it in a number of products.

The terms with which Jolla discusses partnerships is interesting. In fact the general approach by many companies at Slush was not one of monopolies and control, but one of sharing and collaboration.

Dillon explained the thinking behind this. “We’re creating a lot of partnerships and making a lot of friends,” he said. “We’re not trying to control or own everything. There’s a tremendous amount of value that is available in the mobile space, and a lot of different kinds of services can be used and we don’t want to control or own every service. We want to enable new business models and new services.“

It sounds a bit fluffy and friendly in comparison with more cut-throat business approaches. Many large companies present negative campaigns about competitors in marketing and adverts, but at a startup level, this is an expense that not only sounds embittered, but also seems a waste when more time could be spent on making better services. 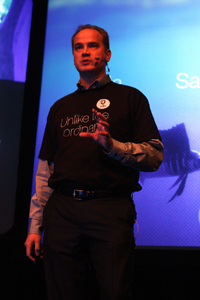 So, is it fluff or is it money-making? Antti Saarnio, chairman of the board at Jolla, noted that the firm is aware of the competitive nature of the market. He outlined that the company will be making money through the sale of smartphones – something that we can look out for in the new year. But this is not the only route to profit.

“There will be Jolla branded phones,” he said. “Jolla phones will be the spearhead of the Sailfish ecosystem. We will also offer retailers, operators and other smartphone vendors, Sailfish phones to be sold under partner brands and this will allow Jolla to utilise the existing customer base of partners and offer a cutting edge smartphone to our partners and friends.”

Using the term friends again reiterated the convivial company culture. But if Jolla starts taking a big bite out of the market when its smartphones are released, you can bet there will be others willing to hook that Sailfish and throw it on the nearest barbecue at the first available opportunity.

The idea of many things working together runs deeper than business partnerships for Jolla. In fact it runs right through the design principles for the Sailfish operating system too.

Dillon explained, “On your phone if you go into an application, that application doesn’t really talk to the others. So one of the features of Sailfish is that you have true multitasking where you can use multiple applications at the same time without having to go deeply in and come all the way back out in order to do another operation.”

He’s right, it’s fiddly and often things don’t run together at all on smartphones. With the average computing power available in current smartphones it’s frustrating that more operating systems do not offer multitasking. It’s no wonder that Jolla has been working on a different way.

Martin Schuele, Jolla’s chief designer, ran through the Sailfish UI in a separate presentation. It was food for thought for any mobile developer.

Not only do the applications work together – meaning you can stream music, check your email and browse the web at the same time. The company has also taken on a basic principle of graphic design for mobile and pushed for a change.

Jaakko Roppola, senior designer at Jolla explained that the icons we may be accustomed to seeing on smartphones take a lot of work to describe a process. Sailfish just shows that process. No cartoon icons required and a very clean and calm screen to look at.

The clean presentation is also due to clearing out all of the useless furniture on a device home screen. “Usually screen real estate is taken up with the status at the top of the screen, then a navigation tool bar at the bottom,” Schuele explained. “Then there is usually an application header and after that you need tabs. You have less and less room your own content. With Jolla, we are uncluttered so the whole stage is your content.”

The need to add more to a screen has led to larger screens and larger devices, Schuele explained. “This makes it more difficult to use with one hand in a convenient manner. You have to stretch to reach the back button and move around to use the device. Our user interface has a new interaction paradigm which is solving that issue and is independent of any screen size.”

By new paradigm, he was talking about scrolling up and down through the home screen and a left and right navigation to get back to that screen from any application. According to Schuele, this means you can practically use your phone without looking at it.

It’s an interesting thought if you have ever been caught behind a text-walker in the street and one that makes mobile design more applicable to humans rather than training us to use the device. If you’ve struggled with a wider handset, or found the new iPhone a bit long for the reach of your thumb, you’ll recognise the problem they are trying to solve.

The OS, UI and SDK talks all helped to establish the Jolla brand further. Anyone who is tired of Facebook’s language would appreciate the mantra, ‘We are Unlike’, which was repeated in the presentations and emblazoned on the team t-shirts.

Pushing past the tech crowd

Jolla ripped open a bunch of news in one go, dominated the #slush2012 tags on Twitter and made everyone feel welcome in the process. It was a fair mix of hard tech and good vibes.

When you watch presentations by the big players in mobile today, you’ll note that Apple sounds as though it is enabling fine artists, Mozilla sounds as though mobile development is possibly the most fun you can have with your pants on and Microsoft makes it sound like homework.

Jolla is a very charismatic company. It has a rebellious aspect and it is open to ideas. It supports transparency, sharing and there were hugs on stage. Though there is a solid core of hard tech and code, it sounds as though it wants to party with you and that everyone there will be your friend.

This is what stole the show at Slush 2012. It went a long way with young entrepreneurs and coders. Whether this will transcend the technical and business levels and start punching heavyweight at the consumer level remains to be seen.

But as tech conference presentations go. I think that’s pretty much game set and match for Jolla.