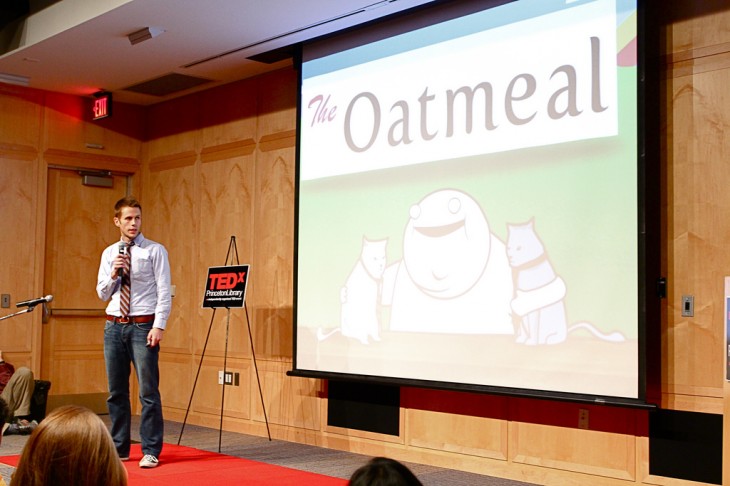 The creator of The Oatmeal, the notorious webcomic about pretty much anything that will make you laugh, may soon be returning to court. It’s yet another odd turn of events.

Matthew Inman, the mastermind behind the webcomic, has been working recently with Recycled Greetings, a company that owns the Papyrus chain of card and gift shops, to sell greeting cards featuring some of his famous webcomic strips.

Recycled Greetings presumably produces the cards, but Inman sells them on The Oatmeal, making a nice little bit of profit and gaining some additional exposure over the festive season.

Oatmeal Studios, on the other hand, is a greeting card company based in Massachusetts. They’ve been selling cards for 35 years, and have decided to sue both Inman and Recycled Greetings, claiming a trademark on the name “Oatmeal Studios” in the process.

The news, picked up by Ars Technica, explains that in the complaint filed by Oatmeal Studios, the company’s justification was that Inman’s use of name ‘The Oatmeal’ is just too similar to their own branding. It will therefore confuse some consumers, according to Oatmeal Studios, who may assume that the two firms are one and the same.

It’s not the first time The Oatmeal has been subject to a lawsuit. Back in 2011, Inman was accused of defaming funnyjunk.com, a user generated media site. The lawyer Charles Carreon issued a damages claim worth $20,000, which caused Inman to write this rather hilarious post over on The Oatmeal blog.

Inman then setup a fundraiser on Indiegogo, hoping to raise $20,000; the exact amount asked for by funnyjunk.com. Not for his legal costs mind you, but as a donation for the National Wildlife Federation and the American Cancer Society.

The lawsuit that Carreon filed said Inman’s Indiegogo fundraiser was conducted in violation of the California law. Rather than put off potential donations though, it did quite the opposite. By the time the fundraiser had closed in 2012, Inman had ended up raising more than ten times his initial target; $211,223.04.

The case was eventually retracted by Carreon, resulting in another, equally hilarious blog post from Inman.

It was a ridiculous, but also thoroughly entertaining time for fans of The Oatmeal, as well as the media generally. While lawsuits should never be taken lightly, we’ll be following this one just in case it reaches the same epic proportions.