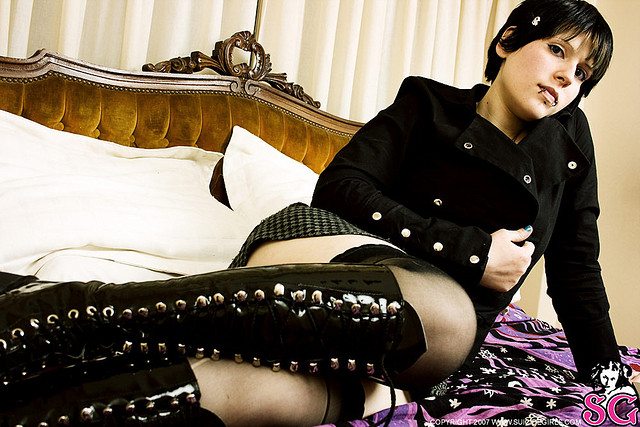 “I believe that SuicideGirls resonates so strongly with its audience because we have been honoring the beauty of tattooed and alt girls and the indie lifestyle since 2001,” says Missy Suicide, co-founder of SuicideGirls. “This was well before it was so popular, which has made our brand so recognizable.”

“To me, female empowerment is about women embracing their bodies and themselves,” says Suicide. “I think that SuicideGirls’ sets depict how each girl feels sexiest about herself showcasing that confidence is the sexiest attribute a person can have.”

The profit lies in niches

Beyond pornography and into blogging

The twenty-something writer has parlayed her blog into a popular web video series on Vice.com, where she documents some of her most famous blog posts. In one of the early episodes, she visits her “online slave,” who paid her rent for months in exchange for sending degrading text messages and humiliating in public. Another one has her discussing her gleeful “pee slave,” Brad, a submissive man who pays to drink Sciortino’s urine and happily tells her that she should “bottle it and sell it for gold.” In addition to regaling tales of her own personal sex life, she contributes advice to a multitude of online and print magazines and hopes one day to make Slutever a community affair.

“It’s the major question of my life, ‘What am I doing?’” Sciortino jokes. “I think the goal is just to create a place where people can talk about sex in the most open and honest way — the discussions in the comments are always something I’m really excited about and I want to do more of that.”

As for profit and revenue, all of these websites make money strictly through online advertising and the sheer volume of the user base. And, unlike subscription-based pornography sites, rarely do these funds trickle down to the actual people performing the act. Cam girls, women who live video chat and broadcast their exploits to willing voyeurs, can make hundreds a day depending on their popularity and viewership. Otherwise, those who broadcast on hubs are doing it more for the pleasure than the cash. Even more mainstream social networks, such as Tumblr and Reddit, also have massive porn sub-communities — meaning that the market is as saturated as ever with free and easily accessible content. Through all this, though, Suicide isn’t fazed or concerned about her website.

“Tumblr and Reddit tend to aggregate content from diverse sources all over the world so they have the ability to find sexy images throughout all types of digital media while commercial outlets create original content that is based on their branded idea of beauty,” she explains.