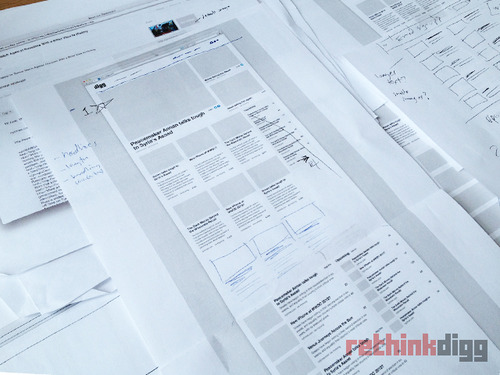 As old-school Digg fans eagerly await the post-buyout relaunch of the once great social news site, we now have a sneak peek to look over before the actual release is ready.

The following mockups and screenshots have just been released, but are supposedly a few weeks old. Still, they’re the best preview we have when it comes to keeping tabs on the future of Digg:

As you can see, the long list of linked headlines that led to Digg’s original success is no more. The new homepage is going to be considerably more visual, according to the Digg team:

It seems to us that what the Internet is talking about is too rich to be properly represented by a list of headlines. Some stories are bigger and have more impact than others; some stories are actually components of larger ones. Some stories can be told with text; others are best told through images.

In case you haven’t been following the news, Digg was recently purchased by Betaworks for a mere $500k (note: rumors say that there were other elements to the deal). Betaworks has ambitiously planned to rapidly rethink and relaunch the site into something worth everybody’s time. We’re keeping our eyes peeled for the results, so keep checking back for more.

Read next: TNW's Daily Dose - Microsoft Surface to hit the same day as Windows 8, HTC out of South Korea, and more