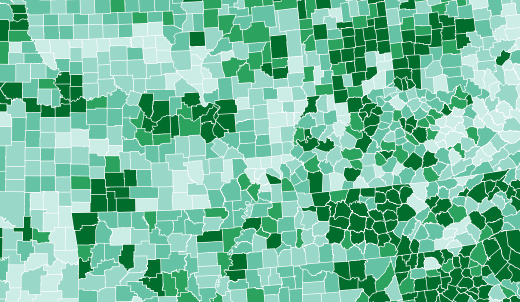 It may seem like a stretch, especially if your parents were the kind that always hammered “be thankful” into your head, but when it comes to emerging technology and the Internet, as well as the changes that they can bring, it’s important to remember that not everyone is as lucky as we are. This can be especially difficult to realize with the complete ubiquity of Internet access for anyone working within or near the tech industry today, but the reality is, there’s still a wide gap in our society where many people are completely disconnected.

Internationally, Internet access is clearly on the rise, especially in developing areas, where if you compare stats from 2010 to 2011, you’ll see growth everywhere. In fact, from 2000 to 2011, Africa’s number of internet users has grown by 2,988.4%, in comparison to the US’ more tamed growth of 152.6% over that 11-year period.

But with this in mind, in North America there’s still a whopping 21.4% of the population that is not connected to the Internet. This means that in the US alone, out of last year’s population counts of 313,232,044, as many as 67,971,353 people aren’t able to access sites like TNW regularly.

Let’s repeat that again: 67.9 million people. Similarly, in the US, 49.1 million people have fallen below the poverty line as of 2011, and there’s surely cross-over between those two numbers.

Of course, that 67.9M stat takes into account aging members of the population, who aren’t as quick to adopt new technologies, but even if you take out that 13% of the population for persons 65 years or older, you’re still left with 8.4%, or more than 26M people in the US without proper Internet access.

In other words, these people might as well live in a different world than us. For us, social media accounts have nearly killed the phone book. For them, a valuable connection to the rest of the world is being completely missed.

This isn’t an attempt to outright glorify high-tech as the key to happiness, but in many ways, using and understanding it is, at the very least, a key part of economic success. That is why zero or limited access is such a problem.

Beyond financial constraints, actual technical limitations are leaving a severe impact on what’s available and affordable. There’s a huge disparity here in the US, where many areas only have 1 provider choice, if any at all. More on this, judging from a study of NTIA’s most recent data, “many communities across the country — particularly in rural areas — lack broadband access or are limited to a single Internet provider.” All you need to do is eye this map to see how lack of competition influences connections across the country:

This doesn’t even take into account download and upload speeds, which can have a crippling effect on access in areas across the world, particularly in Africa.

There’s also another clear barrier: politics, which are playing a growing role in censoring the internet — essentially destroying its purpose as a free-flowing stream of information.

Preventing internet censorship is a relatively high priority to some people in the US, at least judging by the response to SOPA and PIPA, but a look at the Reporters Without Borders 2012 report on “Enemies of the Internet” reveals something much worse: a list of the most censored countries, as well as those that are on the organization’s “watch list.”

The bottom line is, no matter how these restrictions exist — either put in place artificially or as the byproduct of slow growth — they’re leaving an impact on a massive number of people.

But we can make change, and that’s the part which people often forget or neglect. Our telcos in the US are often leery of municipal broadband projects, but our voices can make them happen. Education is key, and people need to understand that not every government project equates to big government.

For every person in the US who doesn’t have reliable access to the Internet and its technologies, four of us do. If our hope is to provide a better life then it’s up to us to make the steps toward our goals. The Internet, and access to it, are wonderful tools. But until we put them to use we can’t hope to have any sort of positive impact.

Only 32.7% of the world population is estimated to have internet access as of December 31, 2011, so as you watch the tech industry continue to gaze into its own navel, I suggest we all try to do the best we can to keep this in mind: not everyone is as lucky as you are to be reading this story, or in my case, writing it.

Read next: Watch: This Google employee's wedding proposal happened via a Nexus 7