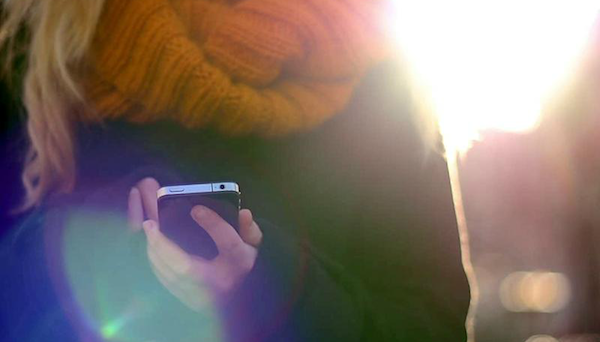 The way modern technology connects society is quite amazing. It bridges gaps across the entire globe, enabling family, friends and lovers to stay closer together than ever before, no matter how far away they actually are.

But while the Internet and mobile devices may be making the world smaller, tech-driven communication is still a relatively cold place when compared to what happens in real life. There’s messaging, voice, photos and best of all, video chat. After that, there’s no tactile response. There’s no touching, or proximity — the sorts of things that make us really feel closer.

No, tech isn’t there yet, but experiments by designers and developers like Marco Triverio are pushing us towards this goal.

Marco Triverio’s Feel Me is “an exploration in digital communications. An experiment in connecting differently,” describes the Copenhagen Institute of Interaction Design. The app’s goal is to create a sweet, playful connection with a person on the other side. It has yet to be released, but even the teaser video / case study shows promise, revealing where users touch in real-time.

Keep an open mind folks, because the above video is only the beginning. Triverio is experimenting with concepts that reach beyond simple touches. There’s more concepts to see that are technologically possible, and put apps like Apple’s Messages to shame.

Feel Me first appears to be a text messaging application. When two people are both looking at the conversation they are having, touches on the screen of one side are shown on the other side as small dots. Touching the same spot triggers a small reaction, such as a vibration or a sound, acknowledging that both parts are there at the same time. Feel Me creates a playful link with the person on the other side, opening a channel for a non-verbal and interactive connection.

“Feel Me” was awarded honors at CIID. Marco is currently working as an interaction designer at IDEO.

There’s a lot of potential here, and with the explosive growth of apps like Pair and Duet, there’s clearly demand as well for tech that brings us together. You can sign up to be notified about the app’s release via the link below. We’ll be awaiting eagerly for more news surrounding the project!