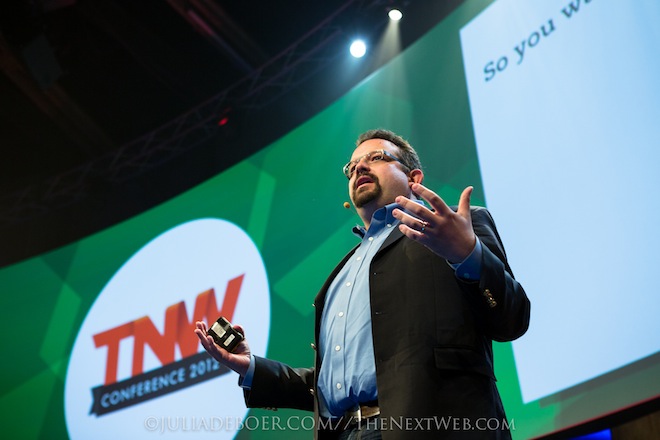 We took notes and will have a longer post for you later on, but here are some interesting tidbits about Evernote that Libin shared at the end of his talk.

The affable chief executive said Evernote currently boasts over 25 million registered users, and is in fact closing in on reaching 30 million.

Last number we heard was 20 million in December 2011, so things are obviously moving fast for Evernote.

Libin explained that the first step is for users to actually sign up for Evernote, which people are obviously doing. The second step is to make people stick around longer, which is also happening. Libin said 40 percent of the people that signed up for Evernote 4 years ago (when it started) are still using the service today.

The third step is to make people pay for Evernote, which Libin says comes naturally.

The company tries to not push people into paying for a premium service, instead giving them value from the get-go and only making it more valuable over time.

After 4 years, more than 25% of users pay for the service today.

His exact words: “It’s more important for an Evernote user to stay than it is to pay.”

In other news: I had a brief chat with Libin before his talk and asked about the rumored $100 million round at a $1 billion valuation, and it was dismissed swiftly.

Libin said they are indeed working on a follow-up financing round, but the negotiations are ongoing and nothing has been closed or decided yet.

In other words, Evernote probably will end up raising funding, but how much, when and at what valuation is pretty much unclear even to Evernote management and current shareholders at this point. To be continued, no doubt.

Sweet: If you work for Evernote you get your house cleaned twice a month and unlimited vacations

Evernote enrolls Socialatom and SclBits to expand across Latin America

Read next: Singapore-based location ad service Chalkboard closes: "Our progress was not meeting our ambition"