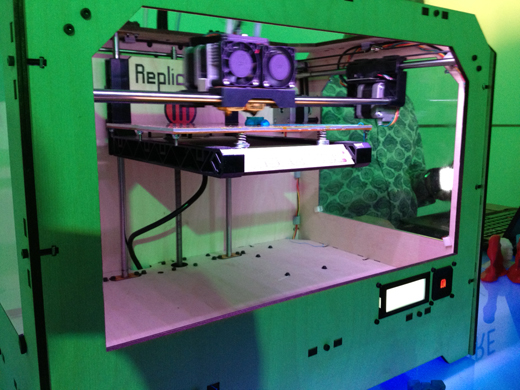 The world’s at an amazing crossroads right now, where someday soon you will be able to print out anything you need, exactly when you need it. Say you have extra guests and need more utensils for dinner. You can print those. What about a new case for your iPhone? You can print that too. It’s that simple. Right now the only barriers are cost and technical difficulty.

A 3D printer from MakerBot runs between $1,100 and $2,000, and that price will continuously drop over time. As for technical skill, a company that has runs deep in the 3D world, Autodesk, is looking to democratize the entire 3D modeling process.

Traditionally, creating a 3D model has been a very technical skill with a massive learning curve. Now, there’s a growing number of 3D modeling/scanning apps available, and the upcoming release of two new iPad apps by Autodesk, 123D Make and 123D Catch, will help democratize the entire process like never before. The free apps will be released in April alongside the previously released 123D Sculpt and the desktop and online companion apps.

123D Catch lets you turn a series of images of any object into a 3D model. With this you can send the results directly to a 3D printer or you can open it up in 1234D Make to covert the object into cardboard slices that cut and assemble yourself.

Similarly, you can use 123D Sculpt to create an object and then send that to 123D Make and convert it into a cut pattern to send to a laser cutter or construct at home.

All in all, these are just the first steps towards a revolution in the manufacturing process. Slowly but surely these tools are helping everyday people morph from consumers to makers. Autodesk’s goal is to make this technology accessible to everyone, and these apps keep the company moving in that direction.

Read next: The Fieldfolio is a beautiful case for your new iPad that doesn't sacrifice toughness