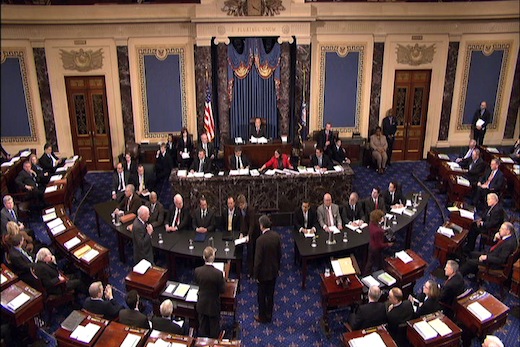 In the wake of Wednesday’s “blackout” to protest SOPA and PIPA, the United States Senate Majority Leader Harry Reid has now said that he will postpone Tuesday’s vote on the controversial PROTECT-IP act.

In light of recent events, I have decided to postpone Tuesday’s vote on the PROTECT IP Act #PIPA

In a full statement, released on TPM, Reid goes into a bit more detail and gives a warning of sorts that the battle isn’t over yet:

“There is no reason that the legitimate issues raised by many about this bill cannot be resolved. Counterfeiting and piracy cost the American economy billions of dollars and thousands of jobs each year, with the movie industry alone supporting over 2.2 million jobs. We must take action to stop these illegal practices.”

But Reid is willing to concede that the Internet has won this round. While he doesn’t outright say that the Senate’s bill doesn’t stand a chance if it were to be voted on this Tuesday, the current level of support simply wouldn’t allow it to pass.

But again, it’s worth noting that the vote has only been delayed. SOPA and PIPA are not dead, they are simply being shelved until they can be rewritten and another attempt is forced down our collective throats. This week was just the beginning in what will be an endless war.

Read next: EU digital chief calls out SOPA on Twitter as "Bad legislation"