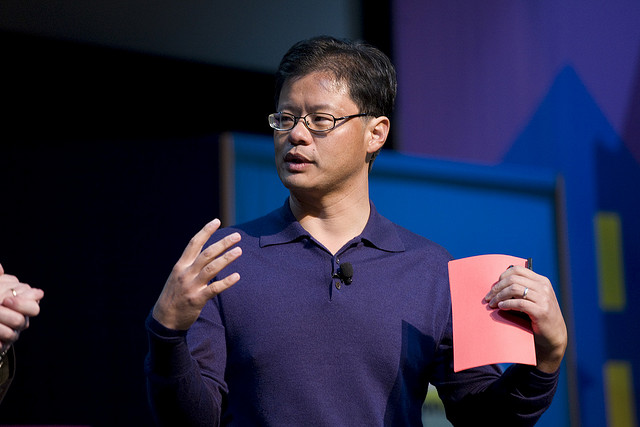 After Yahoo! appointed Scott Thompson as CEO of Yahoo!, it was apparently time for Jerry Yang to say goodbye. The company officially announced his resignation from the board of directors at Yahoo!, as well as from the boards of Yahoo Japan Corporation and Alibaba Group Holding Limited, all effective today.

In a letter written to Yahoo! Board Chairman Roy Bostock, Yang said:

My time at Yahoo!, from its founding to the present, has encompassed some of the most exciting and rewarding experiences of my life. However, the time has come for me to pursue other interests outside of Yahoo! As I leave the company I co-founded nearly 17 years ago, I am enthusiastic about the appointment of Scott Thompson as Chief Executive Officer and his ability, along with the entire Yahoo! leadership team, to guide Yahoo! into an exciting and successful future.

Yahoo! was founded by Yang and David Filo in 1995, and the company went public in 1996. While being on the board since the beginning, he also served as CEO from June 2007 to January 2009. This move is truly a changing of the guards at the company, who has seen its fair share of ups and downs in recent years.

In a release by Yahoo!, newly appointed CEO Scott Thompson had this to say about Yang’s resignation:

I am grateful for the warm welcome and support Jerry provided me during my early days here. Jerry leaves behind a legacy of innovation and customer focus for this iconic brand, having shaped our culture by fostering a spirit of innovation that began 17 years ago and continues to grow even stronger today. Jerry has great confidence in the future of Yahoo!, and I share his confidence in the enormous potential of Yahoo! in the days ahead.

With over 700 million users who use Yahoo!’s email, Flickr photo, search, and news offerings, the company is continually rumored to be up for sale. This might have been the move to make that sale happen.

Read next: The iPad is now an actual metric for measuring tablet web traffic