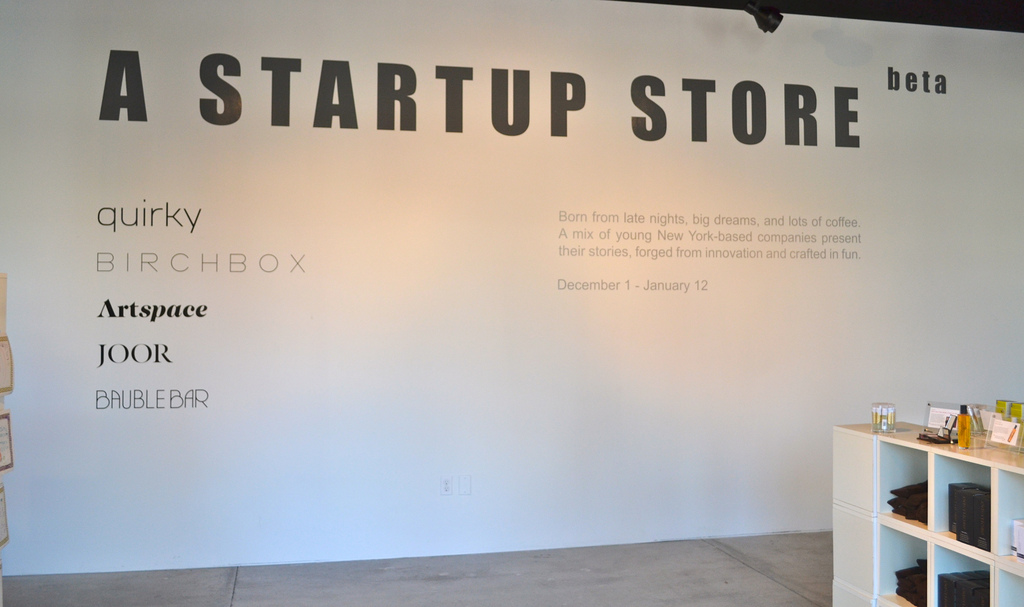 If I had to pick one word to describe Rachel Shechtman it would be trendy. Not trendy in the your-Louboutin-heels-go-so-well-with-your-Prada-purse are trendy, but like the way helvetica, Internet TV and hybrid cars are trendy. (For the record Rachel also dresses very well.)

For the past decade, she’s taken retail consulting to a new level, working with brands like Gilt Groupe, Tom’s Shoes, Bliss Spa, and AOL. And over the past several years, she’s become increasingly involved in New York City’s tech scene advising startups such as Birchbox, Fashism and SmartyPants.

This year, Shechtman decided to launch her own startup. But instead of the typical, springy Internet company, she’s doing what she does best. On December 1st, she launched a retail store, which is currently in its beta period and will officially launch on February 1st. The retail store will feature a different exhibition each month, so it’s like a cross between a pop-up store and an art gallery. She won’t tell us the official name for her startup yet (but she says “It’s really, really good) so for now everyone is just calling it “A Startup Store.”

“It’s not fair that all these digital companies have beta periods and physical experiences don’t,” she tells me. “We need time to work out kinks too!”

For her retail store’s first exhibition, she’s chosen to sell merchandise from 6 New York City startups that normally sell to consumers only on the Internet. Swing by the Startup Store on 10th Avenue and 19th Street to check out beauty items from Birchbox, jewelry from BaubleBar, bow ties from Of a Kind, gadgets and gifts from Quirky, fashion accessories from Joor and fine art from Artspace. For the next week, there will be a party every night and trunk shows on the weekends (with free champagne!).

The Startup Store even mirrors offline what happens online. For example, Of a Kind‘s limited edition of Bow Ties will be next to a whiteboard with a written countdown of items sold. When you check in on Foursquare and sign up for the newsletter, you’ll get a mystery gift. While it may sound esoteric, it’s not. It’s fun, relevant and engaging. Check out our photos from the store below:

The store launches officially in February as a “Love” story and will sell related items like chocolates, underwear, flowers and be paired with a photo-sharing experience and a way to record your favorite first date.

Shechtman believes the future of retail will still be about consumption but more about content and community. She also thinks that retail is an untapped frontier for the advertising industry, which is why she’s asking companies to sponsor each exhibition at costs ranging from $50-$150,000 per month (about the price of a billboard in Manhattan).

So if one month she has a Man Exhibition, it might be sponsored by Thrillist and her next Love exhibition might be sponsored by OKCupid or Match.com. Since her store is nestled in the shadow of New York’s Highline, which draws 5 million visitors a year, it’s a promising way for brands to get in front of consumers in a more intimate way.

Shechtman plans to launch 5 more stories over the next 3 years. She tells me that London is definitely on the list.

Read next: Watch this: Shooting down a virtual jet? You've gotta do it with style.