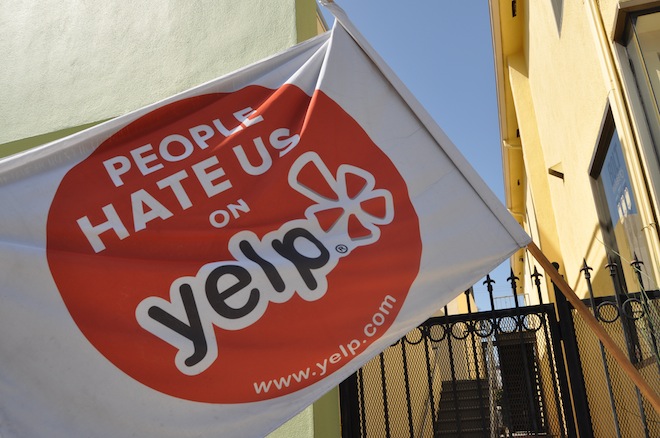 While there’s no doubt that Yelp is still a powerhouse in the online reviews space, that much use doesn’t come without its share of troubles. Yelp has had, arguably, more than its share over the past couple of years, including a recent class-action lawsuit against the company, brought up by businesses that believed Yelp would reward or punish them based upon whether or not those businesses had advertised with the company.

In a blog post today entitled “Case Dismissed. (Again.)“, Yelp CEO Jeremy Stoppelman addressed the fact that the suit had been dropped, but the manner in which he has chosen to do it is a PR nightmare waiting to happen. You’ll note that Stoppelman says “again”, in reference to another suit that was dropped a few months ago.

Stoppelman begins by addressing how Yelp works, and does so nicely enough. However, he also brings up the fact that the manner in which Yelp works opens the door to those who would want to try to game the system. He does this to say that there is an “unfortunate reality” behind Yelp’s algorithm being imperfect.

What’s astounding, however, is the tone that is taken in the title of the post, and then from the third paragraph forward.

“Last year, a few small businesses from among the 20 million or so in the United States filed misguided lawsuits against Yelp…”

[Update: Yelp’s “Business Outreach and Public Affairs” representative has pinged me on Twitter to say that my reading of Stoppelman’s statement was “incorrect”, alleging that Stoppelman is referring to “small” businesses in the legal sense, from a number of employees standpoint. Regardless of whether this is the case or not, Stoppelman’s words were ill-chosen and could have been stated infinitely better than they were. The point that I’m making here is that Stoppelman chose to use words which were demeaning to the businesses in question and that point stands, regardless of definitions.]

Choosing to refer to any of the businesses with which the company is involved “small” is misguided to say the least. At the worst, it’s career-ending as any business that might find themselves in opposition with Yelp could end up with the same fate. Beyond that, though, Stoppelman takes on the arrogant tone of the title once more in stating that Yelp “knew the allegations were false”, but admits that it is “helpful to have the matter resolved early.”

Stoppelman has to face facts here – Yelp’s reputation is far from spotless. The company and its users have had strong accusations thrown at it and, regardless of whether the accusations were true or false, there is damage that has been done. Just as when a judge orders something struck from the record in a court proceeding, the jury has still heard the words and the seed has been planted.

It would seem to make sense that now is the time for Yelp to take a less-aggressive stance against its users, past, present and potential. After all, what business wants to be known as “small” or “misguided” if they find themselves on the wrong side of a complaint?  Stoppelman has never been one to watch his words (calling Google’s acquisition of Zagat “a funny move” comes to mind) but there’s always a chance that going on the offensive against even previous customers could indeed offend others.

What are your thoughts? Are you using Yelp? Do actions like this help or hurt the potential of the brand? Sound off in the comments.

Read next: Coldplay says no to streaming, are they missing out on millions of music listeners?