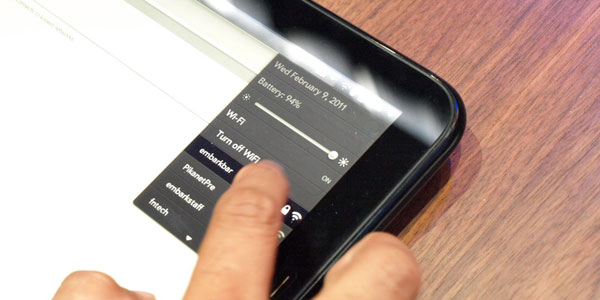 While most entrants have gone after the consumer market that Apple currently dominates with the iPad, assuming that businesses aren’t interested in tablets, Kerris says that the TouchPad is the tablet for the enterprise space.

He adds that consumers who use PCs are another market for the TouchPad, though it’s well known that iPads play just as nicely with Windows computers as they do Macs.

Despite the focus on the enterprise market, Kerris takes a few shots at Apple’s iPad, although the complaints are ill-timed: they’ll all be invalidated this month when iOS 5 becomes available. He says that TouchPad takes part in the webOS profile ecosystem which syncs your data across the cloud, and that TouchPad is the tablet you can take home and start using without having to set it up on a computer first.

iOS 5 brings iCloud integration and allows users to set up iOS devices independently of computers. HP is going to have to come up with some new angles to stay competitive.

The TouchPad will be available in stores as of tomorrow.

Read next: Gmail's got a beautiful new look and you can try it NOW