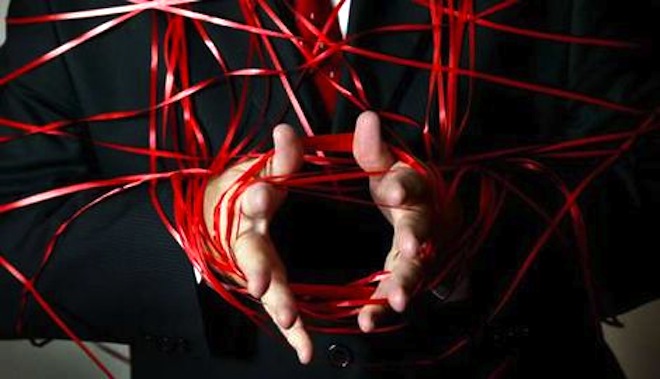 We see literally thousands of pitches here to TNW every week. Without fail, every single week, something goes wrong either due to bad timing, poor communication or just poor planning. Combine those frustrations with the added, unnecessary weight of an embargo and you have a near-literal recipe for disaster.

While I could go on a thousand-word rant about every point here, I was once told that you should never bring up a problem without proposing a solution. That said, I’ll dedicate the rest of this piece to pointing out the specific problems that we’ve seen in the past few days, and providing some solutions to them. If you’d like, I’ll even provide the grain of salt with which you’ll probably take my advice.

There was an application that I had gotten an email about on Thursday. I was told that the story was under embargo until the application went live on the App Store. I’ve seen this type of embargo request before, but it doesn’t change the fact that there’s a problem with it.

Nothing will ruin your launch worse than your application not being live when it’s supposed to be. The app in question was related to the Academy Awards, so it was vitally important that it launch live in the App Store before the show started. That simply didn’t happen. As of the time that I’m writing this, the awards are almost over, and the app still isn’t there.

While I understand the reasoning behind the madness of waiting until the last minute to make your entrance, there are times when that showmanship just doens’t work. This was exactly one of those times. What potential revenue was lost by the app not being able to go live in time? Would the impact have been any less had the app simply come out early, rather than not coming out at all? That’s an easy question to answer.

Apple’s approval process for apps is flaky, at best. At worst it’s a confusing, time-consuming process that is absolutely unreliable. But this isn’t a piece about Apple. This is about the choices of the developers. Had the team chosen to allow the app to release early, they could have avoided the problems entirely.

It doesn’t matter whether it’s the App Store or some other entity — if your ability to produce is reliant on the approval process of someone else, you’d better do anything in your power to plan ahead. Get over the idea of making a timed entrance. It’s considerably better to have your app out and have the issues addressed prior to its “go time” than it is to be sitting around on Oscars night wondering what the heck just happened.

First off, let’s just put it out there — Embargoed material is about the most useless thing that you can possibly pitch to a blogger. Every single one of us knows that somebody is going to break your embargo, unless the material is of “meh” quality in the first place. Your embargo is only as good as the first site (or person) to break and it’s almost assured to happen.

While I do understand the need for the occasional embargo, I’d like to challenge you to think in a different way about what you’re trying to accomplish. Most people who impose an embargo do so because the product won’t be ready until that time. The rest of them seem to have a product that’s fully ready, but they want to “own the news” for the 5 minutes or so after the embargo lifts. In both of these cases, an embargo is the absolute worst choice you can make. Here’s why.

If your product isn’t ready, it doesn’t do any good to embargo it. Things happen, then you have to shift your embargo time, then you end up with media people juggling your embargo along with 5 or 6 others. What you have is nothing short of a frustrating mess.

Rather than add to the frustration, drop the embargo idea entirely. Let us look at your product and tell people if we think it’s cool. If we do, buzz will build. Give us a private invitation to look at it, but only do so once you’re near completion enough that nobody else is going to snag your idea when we talk about it and finish the product before you do.

If your product is fully ready, then let it run. Is it tied to an event? Why hide it from the public? Build the momentum and let all media outlets have a shot at covering it at the same time. Not only will you avoid adding to our frustration, you’ll also likely get the exact same amount of buzz. In fact, it’s likely that the buzz will be spread out across a longer period. Oh, and trust me that we’ll remember your smooth launch, sans embargo. We’ll be knocking on your door for the latest info.

Here at TNW we’ve never (in my time on the staff) willingly broken an embargo. We abide by them because we want to develop a long-term relationship of getting information about upcoming releases. It is, however, quite like having a beautiful girlfriend who likes to smack you in the face occasionally. Almost without fail, we’ll agree to an embargo only to have it broken by another site, leaving us with a red mark and a bruised ego.

We love tech. We love news. By its very nature, the news tends to want to be free-flowing. Doing things that keep that information contained tend to hurt your business more than help it. Please, as you’re building your dream project, plan for its release. Let us know about it. We’d love to take a look at it. Just make sure that it’s ready to start getting buzz and don’t cripple that hype with a needless embargo.