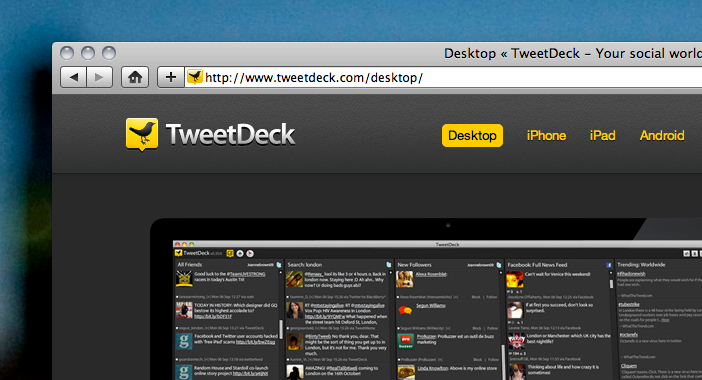 Here’s one that we didn’t see coming. TechCrunch is reporting that UberMedia, the parent of many applications including the previous UberTwitter, has acquired TweetDeck. The sum, from what we’re reading, is in the $25 to $30 million range.

TweetDeck has had a total of $3.8 million in funding, as provided by Betaworks and Ron Conway amongst others. The recently-named UberMedia, headed by Bill Gross, has had its acquisition guns blazing lately in the Twitter space, first with Echofon and then more recently with the UberTwitter buy.

UberMedia also owns a few other clients. You might know the names of Twidroid and the advertising product called FollowMe, which both fall under the UberMedia banner.

We’ve dropped an email to Iain Dodsworth, CEO of TweetDeck, for confirmation. Given the company’s recent push toward more features (the Android and Chrome clients, as well as Deck.ly come to mind) it isn’t surprising to see an acquisition offer having been made.

Gross’ interest in TweetDeck makes sense as well. Self-described as a lifelong entrepreneur, Gross has made a number of moves over the years with his businesses of IdeaLab, eSolar and the traffic-measuring site Compete. His interests seem to be quite varied, but the more recent acquisitions of third-party Twitter clients is a definitive direction in which a TweetDeck offer would make perfect sense.

We’ll let you know what Dodsworth has to say. If the story turns out to be true, it’s not surprising and huge congratulations to Dodsworth et. al. are in order. TweetDeck is an absolutely essential part of our day here at TNW and we look forward to seeing it grow.

As a side note, Loic Le Meur, founder of TweetDeck’s major competitor Seesmic, has an interesting insight:

Le Meur also writes a congratulatory blog post to both Gross and Dodsworth. However, he does again bring up the 20-percent number and questions what Twitter would think of that fact. He then takes the question further with his hypothesis of what is happening with the UberMedia clients on the whole:

What I think Bill is building is very different. My guess is that it’s all going to be about building traffic and having the conversations happen within the apps themselves and even outside of the social networks themselves, mostly monetizing on advertising.

Le Meur also takes the opportunity to show that what Seesmic is doing is categorically different than just being a social media dashboard or Twitter client.

Regardless of what happens, it’s bound to be an interesting few months in the space of Twitter clients, and the applications that contain them.

All Things D is saying that the deal isn’t quite done yet, but it should be finalized soon. All of the TweetDeck shareholders will get an equity portion of UberMedia, it seems.

Read next: 10 Free iPhone Apps to Help You Save Money