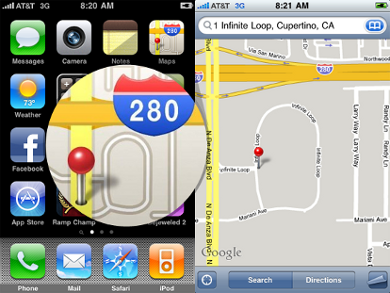 PatentlyApple has found a patent submitted by Apple may bake location-specific services right into the iPhone, allowing the iPhone to automatically display relevant info to the user to the user without having to do anything, simply based on the user’s location.

If Apple can bake this directly into the iPhone OS – perhaps in time for the 4.0 release, but realistically later – it would be huge advantage, especially for its iAd platform.

The basic idea seems to be that users will be automatically served a website or asked to install an app or receive a coupon based on a location that they are near. This could be anything really, but things like a map of a mall, coupons at a supermarket or even notices on future events at entertainment venues are some of thousands of possibilities.

There is nothing in the patent that would indicate that the user would need to check-in to a location, so we’re guessing that the iPhone will display a few of the most likely places that the user is at and then the user will choose that location, then be served the add.