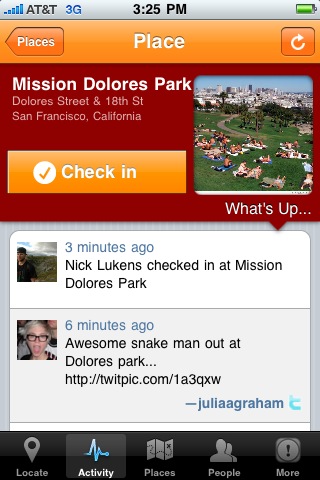 An iPhone geolocation app that has been very quiet about its plans to date has been San Francisco based PlacePop.

PlacePop is emerging out of Ooga Labs – a San Francisco based incubator that is also behind companies like Medpedia, a user generated database of health and medicine information, and Wonderhill, a social gaming company.

Before you dismiss PlacePop as just another “me too” check-in app, you may want to check out the people involved in this project.

Ooga Labs was founded by James Currier and Stan Chudnovsky.  James and Stan earned a nice exit for early social quiz company Tickle by selling it to Monster.com in 2005, and since then have been active investors and board members in a number of high profile start-ups.

And the PlacePop team is also impressive.

Ex Friendster President Kent Lindstrom has been leading PlacePop since May of 2009.  Lindstrom played a big role in orchestrating Friendster’s turn around, in the process helping the company raise $30M in funding from likes of Kleiner Perkins and Benchmark Capital.

This would appear to be serious team.

But let’s get back to the app.

To date, we’ve seen most of the check-in iPhone apps fall somewhere along a continuum ranging from pure utility (Yelp), to pure game (MyTown).  Foursquare and Gowalla both sit somewhere in between.

PlacePop has placed itself squarely on the utility end of the continuum.  They are aggregating content from Yelp and Twitter, making their service immediately helpful in terms of venue discovery.  They are also pretty clear about their intentions to be a “frequent flier program for everything.” PlacePop thinks that check-ins should earn you rewards, not badges and points.

In talking to PlacePop community manager Julia Graham, it sounds like a lot of market research was conducted to determine their direction.  They aren’t convinced that adding game elements is a winning strategy, at least in terms of reaching mainstream users.

In terms of features, PlacePop isn’t bringing much new to the table yet.  They do have a nice photo tool that let’s you add photos of venues – much like Gowalla’s recent addition.

But given the team and resources behind this effort, I think PlacePop is worth keeping an eye on.