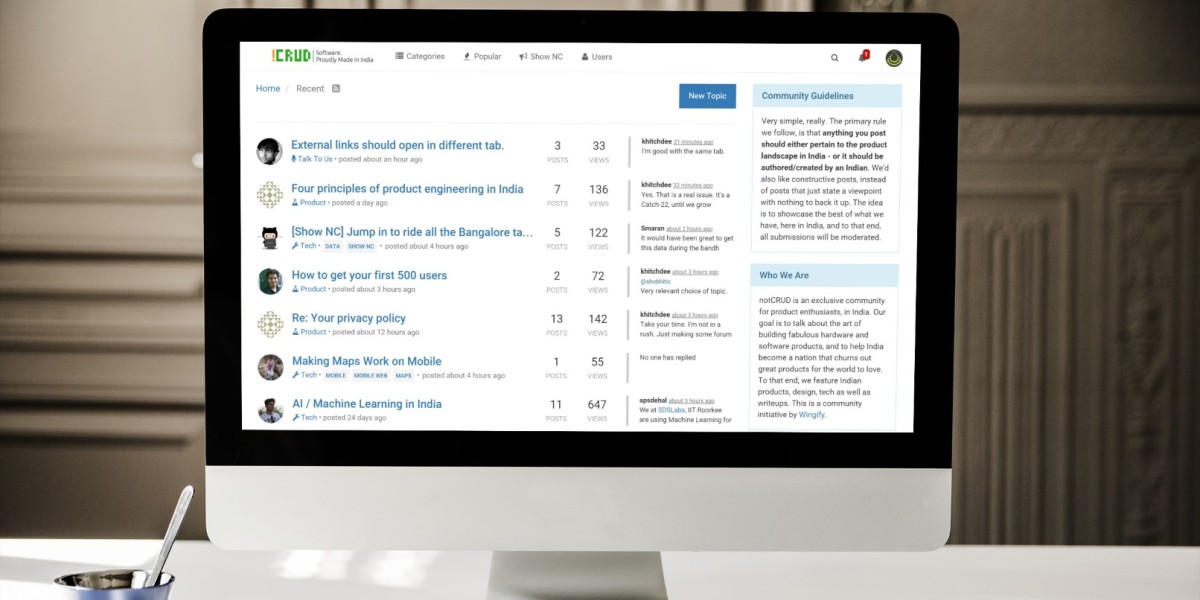 Wingify, the Indian software company behind the popular A/B testing tool Visual Website Optimizer, has launched NotCRUD, a community for developers in the country to discuss products and tech that they’re working on.

It’s largely inspired by the Y Combinator-backed Hacker News, and has a space for members to show off completed projects.

We chatted with Paras Chopra, CEO at Wingify, and Rudraksh MK, who’s heading up NotCRUD, to learn more about how they plan to get Indian developers talking on the new platform.

What made you decide to build a community for Indian developers, when there are larger ones like Hacker News?

Paras Chopra: “I’m a huge fan of Hacker News — it’s where I actually launched Wingify and our first product, Visual Website Optimizer, five years ago. We got plenty of useful feedback from the community, and that was invaluable.

So, with this new community We’re trying to bring the Hacker News ethos into an Indian context. There are now plenty of passionate people building amazing products in India, so we wanted to create a place for discussions about products, tech and design run by Indians, for Indians.

Besides, Hacker News only features about 20 popular links a day on its homepage, which are submitted by users from around the world. NotCRUD isn’t going to challenge Hacker News, but rather serve as a complementary platform for those who are building products for India or want to engage in discussions with creators in the country.

For example, there’s an interesting thread about what Indians are working on in the fields of AI and machine learning. While it’s important for developers in India to learn about, that’s something that may not gain much traction on international forums.

We also have a section for users to showcase projects and resources they’re working on.”

What’s the story behind the name NotCRUD?

PC: “CRUD refers to basic database functions — create, read, update and delete — and in my mind, the acronym describes most poorly built products: a database with a UI slapped on top of it, with no real user experience to speak of.

We want to showcase the best of Indian creativity and ingenuity in product development. So we coined the name NotCRUD to describe quality custom-built software and hardware that Indians are capable of building.”

Do you have plans to build custom features for the site?

“We want our users to drive NotCRUD’s development and we’re always looking for suggestions on improving it with custom features — that’s why we didn’t just create a new subreddit.

We’re only just getting started with NotCRUD right now, so we’re still listening to our users for feedback before building more features. We’ve received requests for HTTPS support and allowing posts in Indian languages.”

How do you plan to grow the community and keep members interested over time?

Rudraksh MK: “We like to think of NotCRUD as more than just an online community. We’re planning to kick off offline meetups across India, where members can discuss products they’ve tried and projects they’re working on.

Plus, we’re also interested in launching product-focused hackathons that aren’t just about writing code, but also about the relevance of your project, how you’d plan its lifespan and growth strategy.

We also intend to keep an eye on posts that gain a lot of momentum, invite their authors to speak at our meetups and feed those sessions back into NotCRUD for the entire community to learn from.”

How does NotCRUD figure into Wingify’s goals as the company continues to grow?

PC: “We’re not building this for short-term gains. We believe that, in the long run, if we have a handle on the community of developers and entrepreneurs, it could help us find great people to partner with or bring on board.”

In addition to a discussion space, the site also allows members to follow others’ posts and chat with them privately.

NotCRUD’s code base is open source and available on GitHub, so you can use it to spin up your own community.