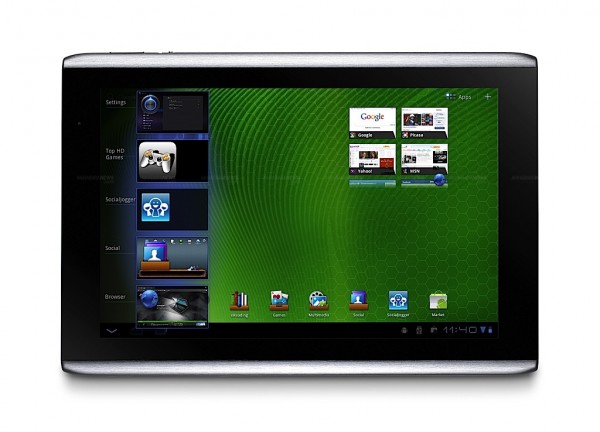 The Iconia Tab A500 which was announced in January this year, runs on Android 3.0 with Acer’s UI on top and sports a 10.1″ capacitive touchscreen with a Dual core NVIDIA Tegra 2 processor.

It includes a 5MP rear camera with a 2MP front cam, Wi-Fi support, a 3260 mAh battery and 16GB internal memory which can be expanded upto 32GB by using SD cards.

The tablet will arrive in the next couple of weeks and you can choose between 2 different variants, an Android version which will be retailing at Rs 27,990 and a Dual boot version with Windows also known as the Iconia W500, will be available for Rs 32,499.

Update: Acer has also announced the launch of its dual screen Iconia TouchBook, the 7″ Iconia A100 tablet and the 4.8″ Iconia Smart A300 phone.

Iconia TouchBook features two 14″ Touch Screen Display made out of Gorilla Glass, a Core i5 processor and will run on Windows 7.  The Iconia A100 comes with features like 7″ display, Dual Core Tegra 2 Processor, 1530 mAh battery and a 5MP rear camera with 2 MP front camera.

And finally, competing with the likes of the original Dell Streak, Acer Iconia Smart is a Gingerbread phone with Acer UI, a 4.8″ HXGA screen, 1GHz Snapdragon Processor, 8 megapixel camera with LED Flash on the back and 2 Megapixel on the front, 720p Video recording and 8GB Internal Memory.

Read next: Apple will not launch new iPhone in the Summer, says AT&T representative