New Status features looks an exact copy of Instagram Stories but this is end-to-end encrypted unlike others.

This update replaced the old “Status” which was like Instant Messager Away status.

In past few months Whatsapp has launched many new and interesting features such as Mention People in Groups, Editing Image & Group Invites and Video calling. And looks like many more new features are coming in next few months.

My About is same as the old Status feature with a different name. In last  3 days Whatsapp added this feature with various names:

My About seems to be the final one. 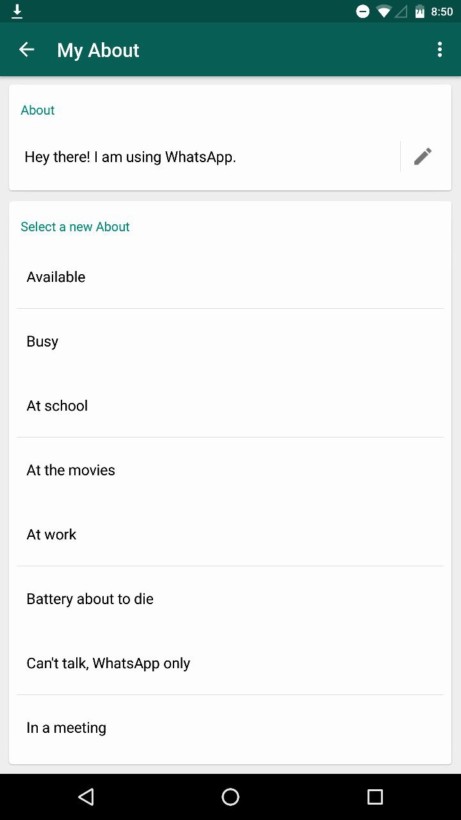 In addition to this “Unsend” a message feature is also available. Currently you can see an Unsend option on Whatsapp and it shows that message is Unsend. But it actually doesn’t Unsend/delete it from Receivers phone yet as this would require updates on Whatsapp Servers as well as application.

Edit message feature may also be rolled out soon. This is a much needed feature for all those who make lots of typos. This feature will allow you to edit a message you sent if the recipient has not seen the message yet.

These features are currently disabled by Default. And can be enabled on using WATweaks application on a Rooted Android phone.

Currently there is no way to Sign up for iOS beta testing. Though there are few sites from where you can download the beta version and install on iOS devices. But in order to do this you will need a jail broken device and WAEnabler application to enable these hidden features.

You can opt for Beta updates by Signing up for Beta Testing Google Playstore.